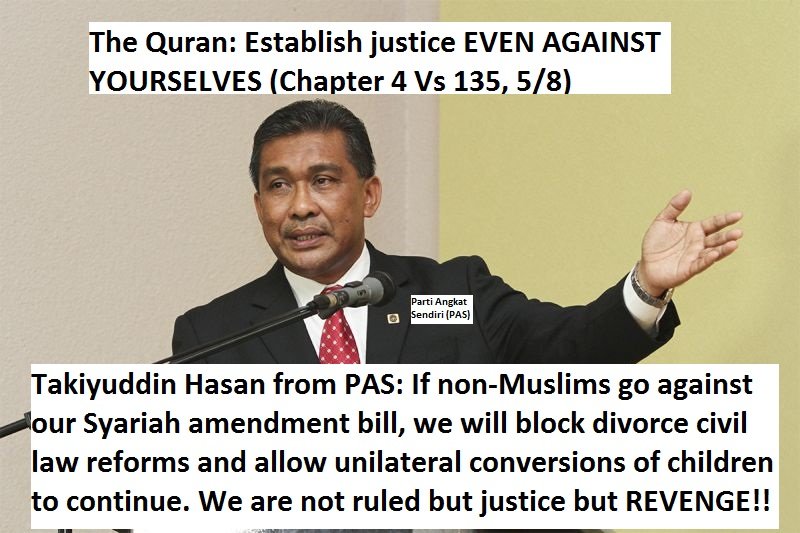 The whole fiasco regarding Rang Undang-undang (RUU)* 355 where the MP for Marang, Abdul Hadi Awang, introduced a private members bill for the amendment of Syariah laws has helped us see what PAS is really like (an informative account about the episode may be found here).

Hadi, who is also the president of PAS, has had to manoeuvre back and forth to push through “God’s laws”.

I am not sure how Hadi reconciles the fact that “God” had to tweak His law before tabling it in parliament but with his portion of the electorate, he doesn’t have to. He can simply get a bunch of innocent children, brainwash them by making them sing religious songs and holding placards that may as well be in Greek. They won’t know the difference! 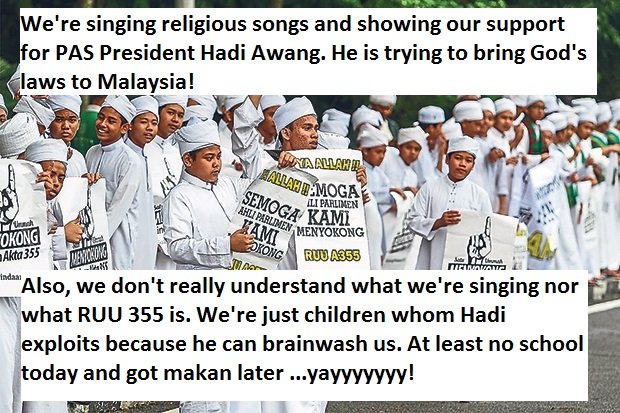 Hadi’s antics aside, I was left in utter shock today when I I read this bit of news.

Takiyuddin Hassan, the secretary general of PAS, issued a threat today to non-Muslim MPs saying that, if they try to block Hadi’s attempt to amend Syariah laws, Muslim MPs will then block the bill to reform divorce laws! If we analyse Takiyuddin’s rhetoric carefully, we will then be able to see PAS for what it truly is.

The reform bill for Malaysian divorce laws is extremely important. In a few cases now, whenever two non-Muslim spouses are in acrimony, all one of them has to do is to convert to Islam and thereby gain custody of the children since the case will be interfered with by the Syariah courts.

This is what happened with the Indira Gandhi case. Her ex-husband simply converted to Islam and changed the balance of power with regards to child custody.

I am not imputing that his conversion is insincere, it may well be from his heart. However, for him to convert to Islam during that difficult period seems very convenient. In any case, the reform bill to change the laws governing this process is well overdue and for the sake of the Rakyat, all MPs should support it.

Takiyuddin’s statement has betrayed him and PAS. Big time.

It tells us just how twisted the mindset of PAS really is. I realize my words are strong but I will state my reasons below.

One. Takiyuddin shows absolutely no value for the concerns raised by non-Muslim MPs.

He acts as if they are trying to block the amendment for some childish reason or just to spite PAS. Why can’t non-Muslim MPs simply be concerned about the well-being of their fellow Malaysians. They may even have family members who are Muslim.

We do not live in an apartheid regime, yet Takiyuddin acts as if we do.

Two. Takiyuddin acts as if Muslim MPs have no minds of their own!

If non-Muslim MPs block PAS, then Muslim MPs will block his reform. What if Muslim MPs disagree with PAS? That is also possible.

In fact, Aminuddin Yahaya, the vice president of ISMA lamented the fact that Muslims opposed RUU 355, despite it being “God’s law”! Yes Takiyuddin, Muslims ARE allowed to disagree with one another. We are not zombies!

Three. The third and most heinous is the fact that Takiyuddin is showing how his beliefs are nothing more than mere bargaining chips.

Lets think about it for a minute: Does PAS agree to the divorce laws reform?

If they do, then they should support it as a matter of principle. No matter what. A principle stands true no matter how other people act. After all, the victims of the Islamofascist syariah courts aren’t the non-Muslim MPs but rather members of the Rakyat. Why should Takiyuddin penalize the Rakyat just because he disagrees with the MPs? This shows his tribalism.

If PAS does not agree to the divorce law reforms, then they should fight it no matter what. It would also be a matter of principle. The fact that Takiyuddin says that Muslim MPs would not oppose the divorce laws reform if non-Muslim MPs shows that, if PAS really opposed the reforms, they are effectively using their principles as a bargaining chip. That is how cheaply they value their own Islam.

Islam is nothing more to them than a mere badge. A football team, perhaps.

Nothing Islamic about PAS

There is little or nothing which is Islamic about PAS. The Quran expects believers to hold on to their principles with great patience and endurance (Chapter 3, Verse 200) yet PAS uses Islam as a means of attaining power or worse, as bargaining chips.

The Quran tells us to establish justice even when it is against our own interests (4/135, 5/8) yet for PAS, it is OK to abandon justice in order to take revenge. This is not Islam, folks. This is pure self-interest.

PAS is becoming more and more irrelevant to Malaysian politics. These days, they act like UMNO’s servant boys who will cause distraction while major injustices are taking place.

Hadi’s tabling of the hudud amendment bill was deferred to next March when you can be sure some other skulduggery is afoot.

(The views expressed are those of the contributor and do not necessarily reflect the views of Rebuilding Malaysia.

This piece was first published on 29 November 2016)

i) Farouk A. Peru is a writer, Islamologist and guest contributor to Rebuilding Malaysia.

(Update on 9 March 2020: In the coup of Putrajaya on 29 February 2020, Muhyiddin Yassin, the leader of the coup, named three PAS leaders as ministers in his Cabinet.

They are Tuan Ibrahim Tuan Man who was appointed as Minister of the Environment, Takiyuddin Hassan (Minister in the Prime Minister’s Department (Parliament and Law)) and Dr Mohd Khairuddin Aman Razali (Minister of Plantation Industries and Commodities).