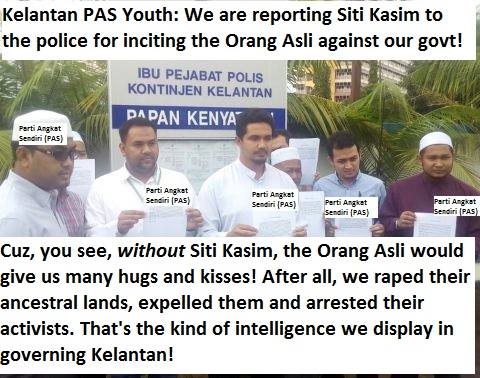 Malaysian Islamofascists are a troublesome bunch. Their job is generally to cause mayhem and if not, generally annoy the Malaysian public.

This week, even policemen were not spared! One policeman was so frightened of being caught for khalwat (unlawful close proximity between the sexes) that he jumped out of a fourth storey apartment and died on the way to hospital. In a separate incident, another policeman went through the same thing but luckily did not get killed. Only seriously injuredâ€¦whew.

However, even JAIS can be said to be just doing their job. Letâ€™s face it. If it wasnâ€™t for UMNOâ€™s negligence, we would not have these skodeng squads causing these unwanted deaths. JAKIM swallows an unaccounted for billion ringgit budget with nothing discernible in return. Thatâ€™s part of what MO1 pays for the conservative Malay-Muslim vote.

But even the Islamofascist religious organizations could not compare with PAS Youth in terms of the lack of ability to reason or to put it more succinctly, stupidity.

PAS Youth has to aim really high to â€˜outwitâ€™ its top brass in terms of this lack of ability. Remember, Hadi Awang thinks itâ€™s necessary to produce four witnesses in order to charge anyone with graft!

I was rather bemused today when I read that PAS Youth Kelantan had lodged a police report against Siti Kasim for â€˜incitingâ€™ the Orang Asli to create a blockade in the illegal logging episode of Gua Musang.

Siti Kasim was said to â€˜incite hatredâ€™ against the government officers by attacking them on social media.

What I would like to ask is this: What exactly was the PAS government expecting the Orang Asli to do?

Here are some statements made by Bersih 2.0 about the incident:

The Kelantan Forestry Department, in collusion with unscrupulous logging companies, have seriously overstepped their powers by taking action against the Orang Asli activists. The arrests, harassment, and intimidation are punitive actions taken against the activists for protecting land that rightfully belongs to them.

Not only were the blockades at Pos Petei and Pos Bihai destroyed, but the huts built by the activists were also torn down, a completely unnecessary and malicious move to no doubt intimidate the Orang Asli activists. Forty seven Temiar activists were arrested on 29 November. Seven more were arrested at Pos Pasik yesterday

Letâ€™s take Siti Kasim out of the equation for a moment. Letâ€™s say she didnâ€™t exist.

How does the intellectually bereft Kelantan expect the Orang Asli to react? By giving them hugs and kisses of thanks for raping their land, ejecting them and then arresting them?!

Has PAS become so drunk with power that they actually think the Orang Asli would kiss the hands which stick knives in their backs?

As a matter of fact, what PAS has done is, as usual, very anti-Quranic.

The Quran relates to us that one of the key points in the covenant is so that we do not eject people from their lands (2/85).

In fact, the only folks who attempt expulsion in the Quran are against the messenger himself (17/76) and against the system of peace and justice (22/40). Expulsion of people from their lands and homes is an act of evil and unequivocally so.

PAS, the so-called â€˜Islamicâ€™ party of Malaysia, have gone against the Quran once again. This shows that its true motivation is nothing but self-interest (Parti Angkat Sendiri is a more appropriate moniker!)

Now the ancestral lands of Gua Musangâ€™s Orang Asli themselves have been raped. And Siti Kasim, a true hero of the people, is reported to the police.

Dump PAS in the next GE. Letâ€™s remove them from Kelantan!