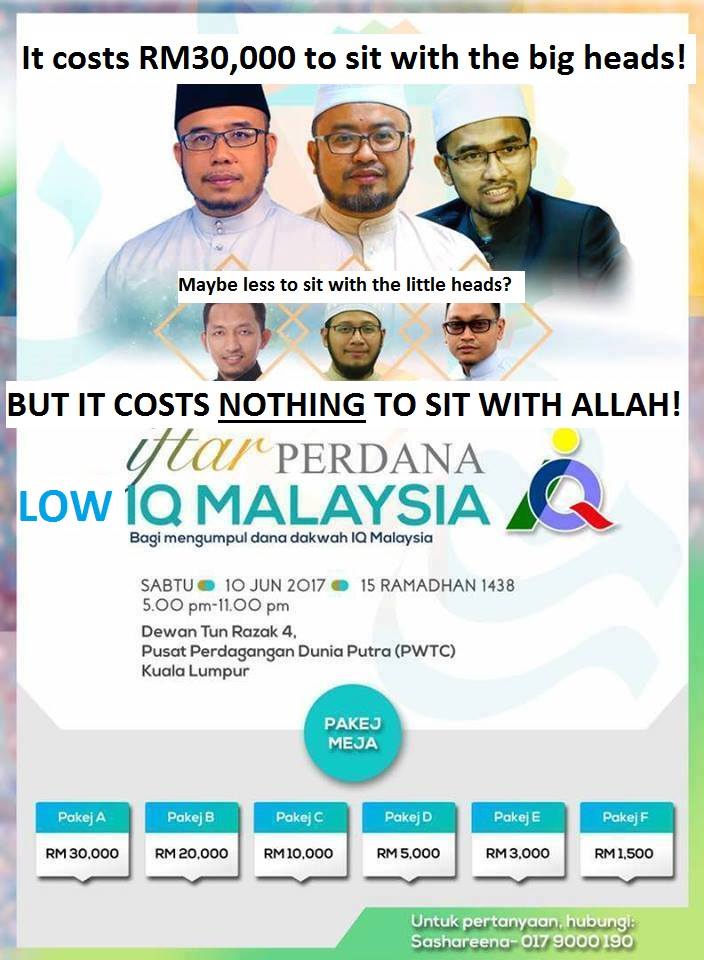 Islamocapitalism is a phenomenon where Islamic elements are used to make obscene amounts of money.

In Malaysia, Islam is big business. From the tahfiz schools to Ustaz Ayam’s quran-friendly chickens, to tacky reality TV shows (Imam Muda), to dramas filled with absurd theology (Tanah Kubur), Islam has becomes the brand through which many sell their religion.

Now it is even possible to get VVIP level Islam! Platinum card level Islam, if you will. From useless flights into the Malaysian skies to learn the Quran, to pointless Islamic cruises, it costs a lot of money to get premium quality guidance.

Luckily the guidance from Allah is free.

This Ramadhan, with the right amount of money, you can purchase a front row table at the Iftar Perdana IQ Malaysia.

It is a premium event where a table can cost from RM 30K, to 20K, to 10K, all the way down to 1.5K. Obviously, the more you pay, the closer you will get to sit with the stars of the show.

The big star is obviously the Mufti of Perlis, Dr Maza. Perhaps he can educate us how Hindus worship cows, but how Muslims do not actually worship the Kaaba!

Another notable Wahabi is also among the ‘big heads’, Rozami Ramle. Rozaimi recently told Malaysians that hudud law should be applied to everyone, Muslim or otherwise. A true Islamofascist.

Supporters of this Islamocapitalist event would say ‘but it’s all for a good cause’. To them, I ask this question – if people were sincerely seeking God’s grace, would they need to sit with these Wahabi big heads in order to donate to the needy?

And that’s not all, how much are these fake scholars getting for their time? Are they doing it for the sake of Allah?

I would also ask this question – what if people don’t have money to be in the audience of these scholars? Does one need RM30,000 in order to have personal time with these Wahabis?

According to Sunni scholars, he was actually chastised by God for turning away from a lowly blind man when he preferred to deal with important folks (The Quran, Chapter 80 Verse 1-10).

I guess our big head Wahabis, experts though they are about hadiths, forgot about this…..