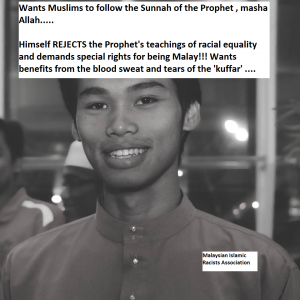 I was quite touched by a piece by one Zaid R Rashid last Monday which mentioned my name alongside one of my mentors, Kassim Ahmad. Though his seminal text, Hadith A Re-evaluation, Pak Kassim started me on my Quranist journey twenty years ago and for me to be mentioned alongside him is a great honour indeed.

This piece did not surprise me considering my critiques of Conservative Traditional Islam but what did surprise me was how this young Malaysian student can take the moral high ground in this matter. He seems to be a student of Islamic studies and yet he is clearly an activist of the confused racist/Islamofascist group, ISMA.

On his facebook page, he staunchly defends Malay rights. One wonders, how shallow must his Islamic knowledge be to not know that Islam does not recognise any such thing! If you sectionalise people according to race, you are no longer acting in accordance with Islam.

Anyway, to answer his critiqueâ€¦.

Firstly, on the label â€˜antihadisâ€™. This is a disingenuous label contrived by Islamofascists to make it seem as if Hadith literature (sayings, doings and abstentions allegedly from Prophet Muhammad)is a given. In other words, rejecting it is rejecting what has been decreed by God Himself. Hereâ€™s some news though â€“ itâ€™s not a given at all. Although I could write a thesis on this, I shall only briefly name three reasons below:

b) The Muslim community immediately never took any steps to compile and verify hadith as they did with the Quran. Imagine! Documentation required to understand the Quran correctly â€˜floated aroundâ€™ (if they existed at all, that is) for TWO HUNDRED AND FIFTY YEARS before being collected in the collections we know today. This is why there are several versions of hadiths for some events. When so much time has passed, so many versions arise.

c) Hadith has fundamental contradictions with the Quran itself. The most glaring contradiction is the issue of freedom of the religion. While the Quran gives clear and unconditional freedom of conscience, Hadith decrees that we must kill those who leave Islam. How is it possible that Prophet Muhammad would go against such a strongly worded decree from God? He did not. Hadiths did not come from him.

2. Zaid showed great indignance when mentioning how Quranists consider hadith to be a â€˜human interpretation of the Quranâ€™. He did not like that one bit. His usage of the quotation marks to describe this (i.e. â€˜manusiaâ€™) shows that he himself does not believe this to be the case. He believes hadith literature to be divine, in other words.

The problem with this, hadith literature did not enjoy a unanimous acceptance among Muslims as the Quran does. In fact, the main collection Muslims have today, Sahih Al-Bukhari, contains only 1 percent of the 600,000 hadiths Bukhari allegedly collected. So it was not Allah who chose hadith, it was Bukhari! Unless Zaid is saying Bukhari was an infallible Prophet or not using his reason to select hadith (perhaps he used the â€˜eeny, meeny, miney, moâ€™ method!), then Bukhari was using his human reason. Hence, his reason can be critiqued, and guess what, it has by Sunni scholars themselves. Thatâ€™s how you have the Wahabi sect which I am sure Zaid would know a lot about.

3. Zaid also presented some information which are either unverified or outright lies. Of course it would not matter because he was preaching to the converted already. Ismaâ€™s level of discourse is truly lacking in any deep thought, they are not about truth but rather confirmation bias to suit their rhetorical needs. Here are some examples:

a) That Quranists follow the thought pattern of the Kharijis, an extreme sect in early Islam â€“ in fact, little is known about this sect and that too from their enemies. There is certainly nothing about them rejecting hadith. The irony of Zaidâ€™s accusation is that it is his own sect, the Sunnis, who believe in takfir (hereticizing people) and putting apostates to death. This is what the Khawarij did and Zaidâ€™s sect follows them.

b) That in the 19th century, quranist movements were started by Ignaz Goldziher. Golziher has no recorded contact with any Quranist movement, let alone had any influence over them. His work â€˜Muhammadan Studiesâ€™ which contained his critique of hadith, was not repeated by a single Quranist of that era! This is the glaring lie which Zaid had to tell to create an appeal to emotion argument. The Jew started it, he cries!

c) Rashad Khalifa was the one who established Quranists in America. This is also untrue as several individuals from the Indian subcontinent have had activities in America since the 1960s. These include Dr Mansoor Alam and Dr Shabbir Ahmed. They have their own websites and have been publishing books for decades. Zaidâ€™s shallow research (possibly copying wikipedia) has failed to give him the facts. Not only that, I am no advocator of Rashad Khalifaâ€™s teachings. In fact, I consider his major work, the 19 theory, to be shambolic and have debated against its top proponent. Ironically, it was the famous Sunni propagandist, Ahmed Deedat, was the one who gave media spotlight to Rashadâ€™s work in the late 70s! Poor Zaid needs to be disabused of his delusions.

4. Zaid then attacks my suggestion to move Friday prayers to Saturdays. A full refutation and defence of my position may be found here and here. However, I would like to address Zaidâ€™s mindset when discussing this issue. Zaid quoted the ubiquitous verse, Ch 62 Vs 9 which is used to â€˜proveâ€™ the existence of Friday prayers. This in itself shows the depth of Zaidâ€™s research and moreover, his command of Arabic.

Perhaps he was not aware that even among Sunni translations, the word â€˜jumuâ€™ahâ€™ (usually translated as â€˜Fridayâ€™) has been translated to gathering or congregation. This is based on the fact that the word â€˜jumaâ€™ahâ€™ it rooted in the letters â€˜ja ma â€˜aâ€™ which means to gather or congregate. This root is used in various form throughout the Quran.

What is even more disconcerting is Zaidâ€™s callous use of the idea that â€˜Islam teaches thisâ€™ or that. He is either blissfully unaware or is trying to deceive his readers into thinking that no interpretation is involved in the process of formulating Islamic law. In fact, the opposite is true. Zaidâ€™s sect, the Sunnis, have so many disagreements that they cannot even agree on how many verses have been cancelled out (they believe the Quran contradicts itself unless verses cancel each other out!). Yet he still has the temerity to accuse Quranists of picking and choosing.

Before I end, I would like to ask Zaid some questions which he will no doubt ignore: