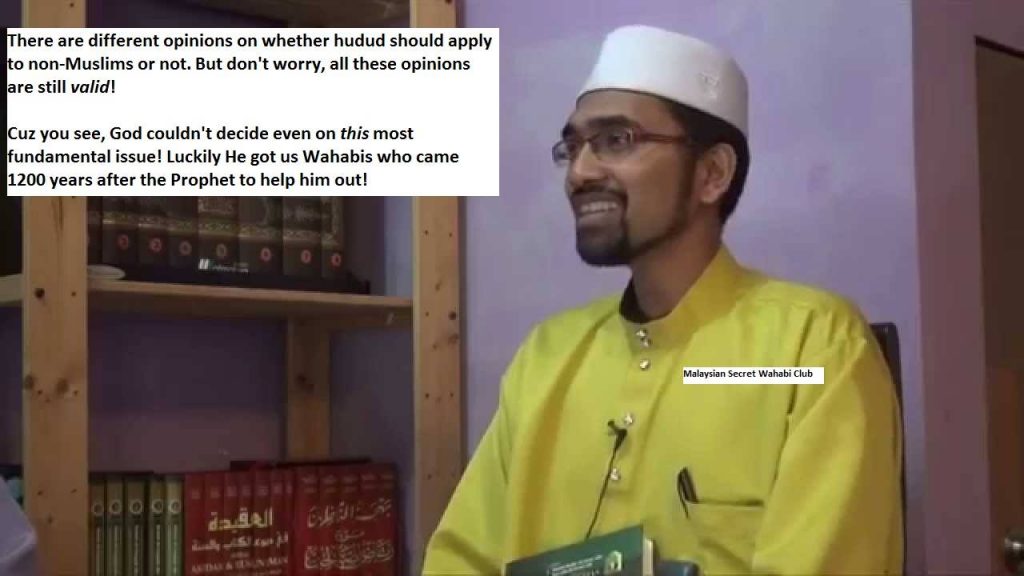 Malaysia is in a lot of trouble with Islamofascists. They are invading many areas in our lives. From Mat Skodengs to misogynistic Syariah courts, to tricky old politician using ancient Arabic laws in new bottles (called RUU 355) to gain political mileage with the Islamic demographic. As if all these weren’t enough, we also have the menace of Wahabism quietly sneaking into our mists since the last few decades.

That the mufti of Perlis, Dr Maza is a Wahabi is an open secret. He doesn’t say it and neither do his associates but it’s quite clear from his religious discourse. Wahabis will never call themselves ‘wahabis’ because it is a pejorative term and that’s fair enough. However, there is also the friendlier name of ‘salaf as-salih’ [(the followers of) the pious predecessors]. This is actually how Wahabis gain their traction with the Muslim masses. They basically tell the Muslims that we must eliminate all the bid’aat (innovations) from our faith and keep to the authentic religion of Islam as taught by the Prophet. They do this by claiming they have the most authentic hadith, questioning even the most ‘authentic’ hadith reports by the Sunnis. How on earth they do this is mind boggling, considering they came 700 years after the authentic collections were written.

There is now an emerging Wahabi scholar on the horizon – Rozaimi Ramle. Rozaimi sat on a panel with Maza (before ‘Paria-gate’ when he was still half decent) and together they tried to perform some acrobatic apologetics for the enigmatic medieval scholar Ibn Taimiya. While Ibn Taimiya was a skilled polymath, he also had some warped views. Wahabis love him due to his literalist approach to Islam which inspired them. This is why they get very squirelly when you ask them if God has two hands (as the Quran Chapter 5 Verse 64 states). Their literalism cannot accommodate the figurative language of the Quran. They also have a tendency of denouncing everyone else (tasfiyah). Ibn Taimiya called certain sufis as ‘allies of satan’ (awliya as-shaitaan) because they do not follow his version of Sunnah. Very fanatical people indeed.

Yesterday, Rozaimi enjoyed the support of the Rakyat on the social media when he took on Hadi on the issue of RUU 355. He was ‘doing a Maza’, showing the amendments of RUU 355 are not literally (there’s that word again!) in the Quran and Hadith. However, what this really showed was Rozaimi’s Wahabiness as Wahabis totally eschew any analogical reasoning. While I totally oppose RUU 355, I also oppose the irrational literalism of the Wahabis. The answer is very simple – none of these laws are Quranic and they need to be unceremoniously removed. Rozaimi was simply making a play for support, just like the arch-Wahabi, Dr Maza himself.

Furthermore, today Rozaimi actually exposed his real view. He said that he wanted hudud laws to apply equally to Muslims and non-Muslims. Unsurprisingly, this is also Maza’s position. This is the true face of Wahabi supremacism. They wish for nothing more than to subjugate everyone to their brand of Islamofascism. What happened to our federal constitution and our secularity? They will simply fly out the door and we will become another Saudi Arabia.

All right thinking Malaysians – open your eyes to Wahabism. They are another form of Islamofascism and must be boycotted.