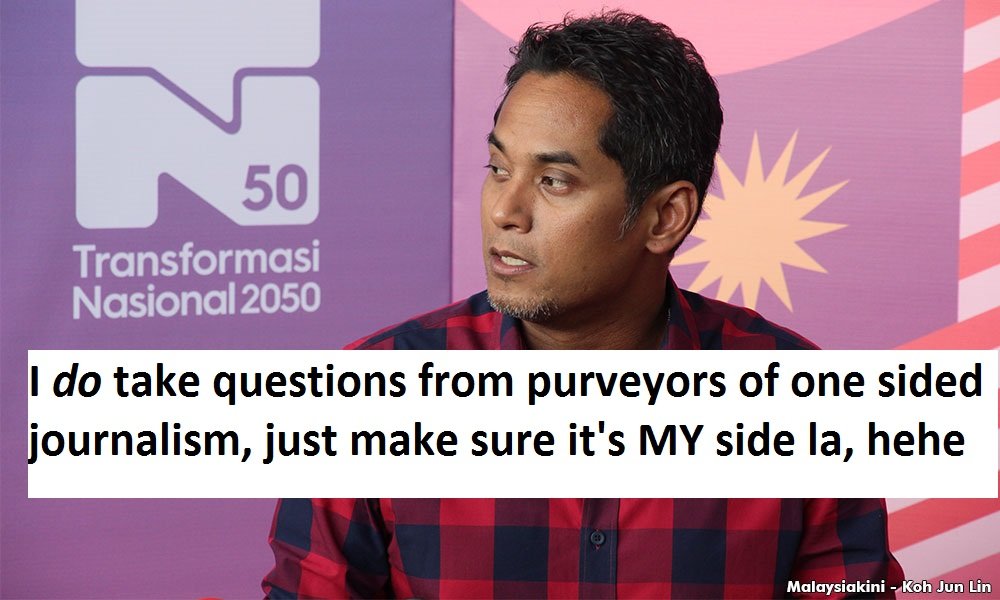 I have some admiration for Khairy Jamaluddin. For an UMNO man, he actually has some good points. He fingered the Malay obsession for skin on skin ‘salams’, for example, by showing how King Salman shook hands with Melania Trump. Before that, he defended the clothing used by athletes against the sex-obsessed Islamofascist mullas. Well done, Khairy!

However, watching this interview by Khairy, I must say how rather disappointed I am. Khairy refused to take a question from a Malaysiakini journalist because, according to him, they are purveyors of one sided journalism!

Here are the questions, in case you were wondering:

1. How much is the allocation to hold the TN50 dialogue sessions and events, and which ministry’s budget is the funding coming from?

2. Would the government hold a TN50 townhall session with representatives from the opposition, as requested by PKR vice-president RafiziRamli?

3. Whether the government would hold a TN50 dialog session with the media industry?

What is the problem with these questions? Any honest government official should be able to answer them.

And of course, all journalists will subjectively phrase their questions. This is the nature of language and political persuasion. However neutral one claims to be, if one phrases a question, there will be some slant. The question is, why does Khairy not simply take the questions, answer them and balance them off with his own slant? That way, people will be able to understand both sides of the coin.

Will Khairy only take questions from his pengampu’s (sycophants)? There is no shortage of sycophantic pro government media but if Khairy was truly interested in democracy, he should be brave enough to engage with any and all questions, however challenging they may be. Surely, any person schooled in philosophy would able to see that.