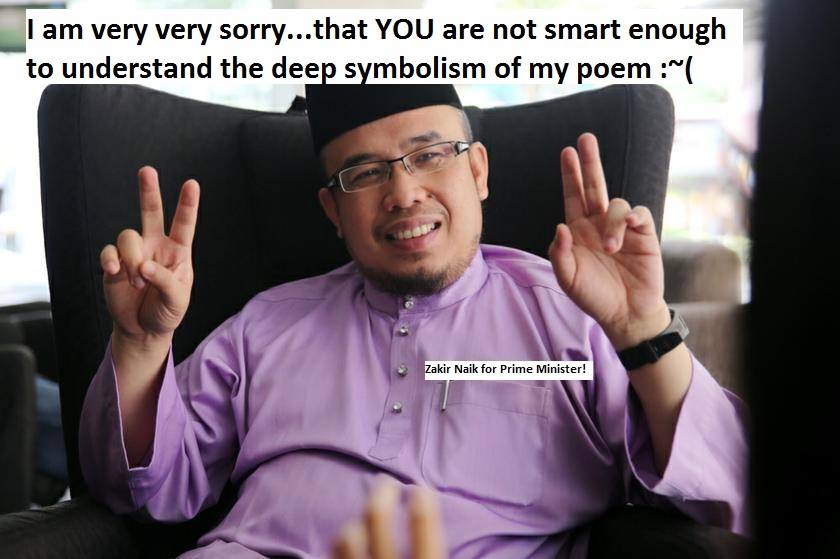 People make mistakes and no one is an exception. To err is human, to forgive divine. But when one makes a mistake, the right thing to do would be simply to own up and sincerely apologise. Sadly that is not what the Mufti of Perlis, Dr Mohd Asri Zainal Abidin (Maza) did. Rather, he is currently digging an even deeper hole that the one he previously dug!

It all started last week, when Maza posted a poem which insulted Hindus. That poem included elements of ‘cow worshipping’, ‘widow burning’ and the caste system. You may read my rebuttal of it here. However, after a tremendous backlash courtesy of Malaysians from all races and religions, Maza was forced to reconsider his position. However, instead of recanting his position and asking for our forgiveness, he started spinning his poem in another way..

According to Maza, he aimed his poem at the Indian BJP led government and their nationalist stance which emboldened atrocities against Muslims by Hindu fundamentalists. His poem was actually misunderstood. Was it really? Allow me to analyse some of its contents and offer some comments (the poem is in italics and Malay):

Asri later claimed that ‘mempertuhankan’ here means to glorify, rather than deify. Why did he then not use the word ‘menyanjung’. Given the cultural baggage which comes with the Hindu association with cows (Muslims tend to pejoratively call them ‘cow worshippers’), why was Asri not more careful?

This ‘pendakwah kita’ is thought to be Zakir Naik. If this is true, then how on earth is this vile Islamofascist ‘our preacher’? He has done nothing but sow seeds of disunity since he came here. In a recent comment, he has actually said that Umno and Pas would make an ideal coalition! What kind of ‘Islamic preacher’ would ask for a nationalist government?!

This is the sentence which exposes Maza’s pathetic spin. If the ‘yang mempertuhankan lembu’ starts to ‘menyeru agar pendakwah kita dibelenggu’, then they want him to be surrendered to the oppressive government, then how can the first party be equivalent to the second? Obviously the ‘cow worshippers’ and the ‘oppressive government’ are two different parties! The first is Hindraf and the second is the Indian government. This should be patently obvious to any literate!

What does a secular, democratic Indian government have to do with a caste system? Again, Maza was taking aim at cultural peculiarities associated with Hinduism.

Also, in an Islamic state in the classical sense of the word, non-Muslims have severe restrictions. They cannot be leaders, soldiers or judges. In the same Islamic state, women cannot marry, work, or even leave the house without the man’s permission. How is this not a caste system?

Do I believe Maza aimed the poem at Modi’s government? Not for a second! Maza is trying to cover his mistake, that is my opinion. What a pity too. He has lost all credibility with the right thinking people of Malaysia. We can tolerate mistakes, but not from those who are too arrogant to sincerely apologise. If I was Dr Maza, I would hold my hands up and say ‘sorry, this will never happen again’.