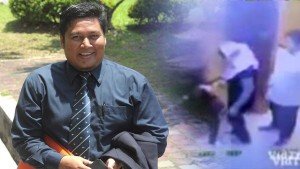 If you suffer from domestic abuse, do NOT suffer in silence. The video below shows it all. It is from The Star, whose reporters covered his trial.

Mohammad Affandi Ismail, the 39-year-old vet, goes to court, smiles, and givesÂ  a thumbs-up to reporters. He allegedly beat his wife, to teach her a lesson, for turning his back to him. For disrespecting him.

Shocking scene in the lift.

The family entered the lift and the wife stroked her daughter’s hair. The husband tried to say something to his wife, but she turned away, at which point he swung his arm, and hit her with such force, that her head hit the side of the lift and her tudung was displaced. Their daughter was almost knocked over.

His wife ran to the other side of the lift, but Mohammad Affandi cornered her and repeatedly punched her face and head. Their daughter tried to intervene but was ignored.

At one point, he kicked his wife as the lift door opened, so she fell onto the floor of the corridor. Her daughter ran to her mother’s aid, but was pushed aside by her father who again kicked the mother.

Mohammad Affandi, a father of three, from Jerantut, is heavily built whilst his wife has a small frame.

He reminds us of men who treat their personal possessions, like cars or sound equipment, better than their wives, girlfriends or mothers.

He is an arrogant character, and one wonders if he behaves badly at work?

His wife has been granted a protection order.

The offence happened on 12 August 2013. The charge, under Section 323 of the Penal Code, carries a maximum one-year jail term, or a maximum fine of RM2,000 fine or both.

What must his children think of a father who uses his fists to settle an argument? Was he the product of an abusive parent?

He is a disgrace to fathers, men, and especially to Malay men.