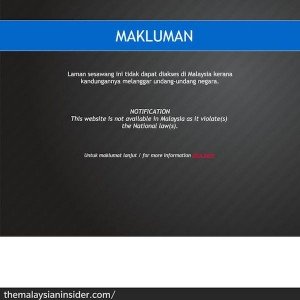 Malaysia is not a democracy. It is fast becoming a communist state.

The latest cowardly act is the decision by the government of Najib Abdul Razak to block ‘The Malaysian Insider’ (TMI) citing “national security reasons.

The truth hurts. Najib and his Cabinet are afraid of what the alternative online newspapers have to say, so the easiest thing for them to do, is to pull the plug.

It should have been a celebratory day for TMI because it is eight-years-old today, but the Malaysian Communications and Multimedia Commission (MCMC) enforcement chief Zulkarnain Mohd Yasin confirmed that TMI was banned.

Malaysian government is afraid of the truth

Tell us Najib and MCMC, “How has TMI flouted Malaysian law?”

Did you notify TMI about which law, sub-section, article etc which had been flouted?

The reason TMI is blocked is because someone is afraid.

The higher they rise, the more desperate they become. Najib and his merry band of clowns, who dance to his tune, are also scared. If their leader goes, they will too. The rakyat will make sure of that.

The Malaysiakini editor-in-chief Steven Gan has warned the rakyat that we have not yet seen the worst.

In other words, be prepared for more websites and online papers to be banned.

He said, â€œIf itâ€™s true that TMI was blocked because it published a story on MACC having enough proof to charge the prime minister over the SRC money, then that’s a cavalier use of the law.â€

He advised readers that if Malaysiakini were to be blocked, its users should go to its Facebook page for the latest updates.https://www.malaysiakini.com/news/331729

Malaysians live in a police state.

The MCMC press release confirmed the ban for “producing content that allegedly violated Section 233 of the Communications and Multimedia Act.”

The MCMC warned other news portals not to circulate what it described as “unverified” information.

The response from PKR communications director Fahmi Fadzilwas was swift. He said, “The draconian action clearly violates point seven of the Multimedia Super Corridor Bill of Guarantees which guarantees no Internet censorship and the action was likely due to TMI‘s report on the RM2.6 billion ‘donation’ to the country’s top leader.

“It proves that Putrajaya fears the free media, especially the online media which is not so easily silenced in particular on important issues in the country.” http://www.malaysiakini.com/news/331728

Fahmi has demanded that Putrajaya reverses the ban.

So, for those who are still in denial, when will you wake up?

The day you finally realise that we live in the dark ages, is when the door is shut on you, and the lights turned off. Scream in the dark and as loud as you can. No one will be listening.