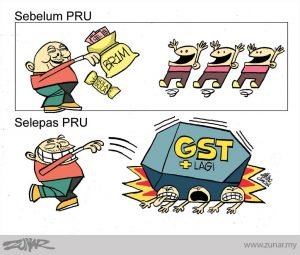 Yin says: As GE14 approaches one is swamped by postings declaring that Pakatan Harapan (PH) will win or that it has no chance. A lot of it is just hot air without substance. Even the analyses done by the ‘experts’ are by no means foolproof.

Trump and Macron proved that the experts are by no means infallible.

But overall, even without the Redelineation Exercise it would be a tough ask for PH to win power. But with the Grand Gerrymander, the hill has become a mountain.  (I discount the impact of the Fake News Law as it is almost impossible to implement it adequately – they will make an example of a few to scare the rest but that’s all they can do).

One hope is for the Malays to find their true religious/moral bearings. Islam teaches honesty, truthfulness. There is no place for corruption in Islam (and for that matter all religions). If the Malays in a soul searching examination of what is going on in our country realises that the present situation is immoral and against the teachings of Mohammed (pbuh) then a Malay tsunami is possible.

The other issue that occupies the thinking of Malays is that they will lose their position in the country if not for UMNO. This has been drummed into them by no other than Mahathir himself (. . . talk about ‘what comes round’) and it will be hard to shake them from this fear that the Chinese will take over. But hopefully with leaders like Zaid Ibrahim in DAP, and the collaboration of Amanah and PPBM , the Chinese is less of a bogeyman. 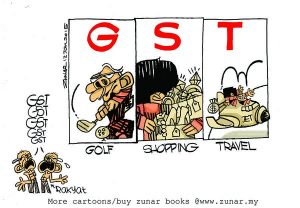 The removal of the GST

But at the end of the day what counts most is: How GE14 will affect their pockets. The removal of the GST is a good incentive to appeal to the masses. Just the promise to remove it is not enough because UMNO/BN will say that it is impossible as it would bankrupt the country. PH has to explain in every kampong and every low income urban community how it is in the first place an unfair tax as it affects the low income much more than the rich. An additional RM100 a month can mean an extra 20% more expenditure to the family budget of a poor family but only 0.00001% to the rich. And to those who can afford diamond rings and designer handbags, it’s even less than what they tip the doorman. How can this be a fair tax?

The country managed well before GST; until we started wasting money. If we manage our finances wisely there is no reason why we cannot do so again. If we reduce corruption, if we stop leakages and stop awarding  tenders to cronies eg – the toll roads, private power supply ( both of which Mahathir was guilty of) then we will manage. Toll roads and giving lucrative contracts to cronies punish the rakyat who pay for them.

If PH can explain this to the rural constituencies then it has a chance despite the gerrymandering. No one likes to be cheated, everyone wants a little more money in their pockets – not bribes but honest money which is theirs by right.

We can hope that the younger generation who have had tertiary education and are working in the cities can inform their relatives in the kampungs of the real issues; tell them that a Malay hand will remain on the wheel, that they should vote on the basis of who can deliver and not on race or religion, who is more honest and not who can give freebies which will dry up after the elections is over.

The fight is in the kampongs and the longhouses in East Malaysia; not in the towns and cities. If PH resources is focused in those areas and on the issues that affect the rural voters instead of attacking those who do not agree with them (but who are not pro BN) and whose votes would make little difference in the urban areas anyway, then it has a chance.