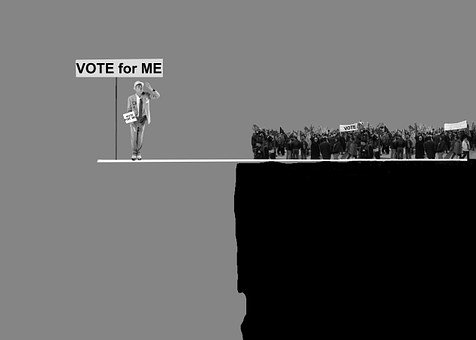 GE-14 will be a defining one in our nation’s history. It will decide what kind of nation we will be.  For this reason it’s not a simple matter of compromise or settling for the lesser of two evils as many think. It is a once in a lifetime opportunity to decide the direction we take as a nation.

What kind of country will we be?

It’s very tempting when faced with a present ‘evil’ to grasp the nearest and easiest solution but even if the result goes the way we want, it will not solve our root problem. At best it offers only a respite. At worst it will be further reinforcement of the status quo regarding race and religion, especially if we get the wrong prime minister.

It’s also not exclusively about corruption, even though Pakatan Harapan wants to make 1MBD the central plank of its campaign against UMNO/BN.  This is merely a symptom of a deeper malaise.

It’s not even about  CAT – competency, accountability and transparency, the catch phrase DAP is so fond of using. Honest and efficient government must be a given. We should not need to demand but expect honest and good governance of those in power.

In GE-14 we should be demanding of those who want our votes the direction they want to take us. Are we to continue on the trajectory of racial hegemony where the tyranny of the majority prevails; of greater Islamisation as PAS wants and UMNO is giving in to; OR do we take the path of true Equal Citizenship, of a government for ALL Malaysians without “Ketuanan” of any kind. After 60 years it is time we get serious about Bangsa Malaysia.

What is the vision of those who want our votes? What kind of country will we be? This then is what GE-14 is about.

What do you want?

We know what UMNO wants. They want a Malay Malaysia with the others taking a subservient role. In other words they want the status quo where racist policies apply. We are becoming an apartheid nation according to Dr Syed Farid Alatas of the National University of Singapore (MalayMailonline).  I say We ARE Already An Apartheid Nation Institutionally. Policies are made with only one community in mind and the others are expected to fit in.

PH is asking us to vote them into power, but what is PH’s vision? Can PH bring back the multi-racial, multi-cultural, Malaysia of equal citizenship promised in the Constitution of 1957?

Mahathir and PPBM has openly declared they want a Malaysia not much different from UMNO’s – that is, the continuation of KetuananMelayu, a two tier citizenship of Bumiputras and the others; of special privileges and racial discrimination; while the other parties in PH want to do away with racial policies. There is little in common between PPBM and its partners on this score. They are only bonded by their desire to get rid of Najib/UMNO and take power. Therein lies the weakness of PH – voters don’t know what they stand for other than to get rid of Najib. What are they promising Malaysians? If Mahathir is the PM, it will be more of the same. So why should anyone vote PH? To get rid of corruption? But Mahathir’s 22 year rule was riddled with corruption and abuse of power.

Malaysians demand a return to the principles our nation was founded on.

Merdeka was won on the understanding of equal citizenship with provisions for privileges given to the Malays to enable them to ‘catch up’ with the others. A sort of affirmative action in the context of their economic development.This is not a provision for the ‘Ketuanan’ of one race over all others otherwise it would make a mockery of the universally accepted principle of citizenship.

Our constitution also establishes without the shadow of a doubt the principle of ‘freedom of religion’. It also states that we are a secular state. But this has increasingly come under challenge.

These two cornerstones of the 1957 Constitution have been altered, beaten out of shape and changed beyond recognition by subsequent governments.

There were also other changes which emasculated the judiciary and undermined many of our institutions carried out under Mahathir.

GE-14 will determine whether we continue in the same vein – further strengthening “Ketuanan Melayu” and dividing our people along racial (and religious) lines, or whether we are Bangsa Malaysia in both action and spirit.

It will determine whether we descend further into religious extremism and eventually into an Islamic State under Islamic Laws. Perhaps a Caliphate even.

We either heal or face an exodus

The result of GE-14 will either see our nation begin to heal,or face an exodus of people from what they see as a bad situation turning into a hopeless one. It will determine whether Sabah and Sarawak will be pushed to leave a partnership that has been exploited by those in power on the Peninsula since day one.

Instead of scaring voters into voting for them by raising the specter of another five years of Najib/UMNO, PH must offer voters a clear choice between the ruling UMNO/BN and PH. To date it has not.

Despite GE-14 drawing nearer PH has not been open and forthright with the people. It has not declared its candidate for prime minister and that raises suspicion that they have Mahathir in mind – someone many Malaysians will not accept. They have not published their manifesto for voters to scrutinise.

PH has more to lose by being vague – it will turn many voters off.

PH must come clean on its stand. To use fear (of Najib/UMNO) to scare us into voting for them is not the way.