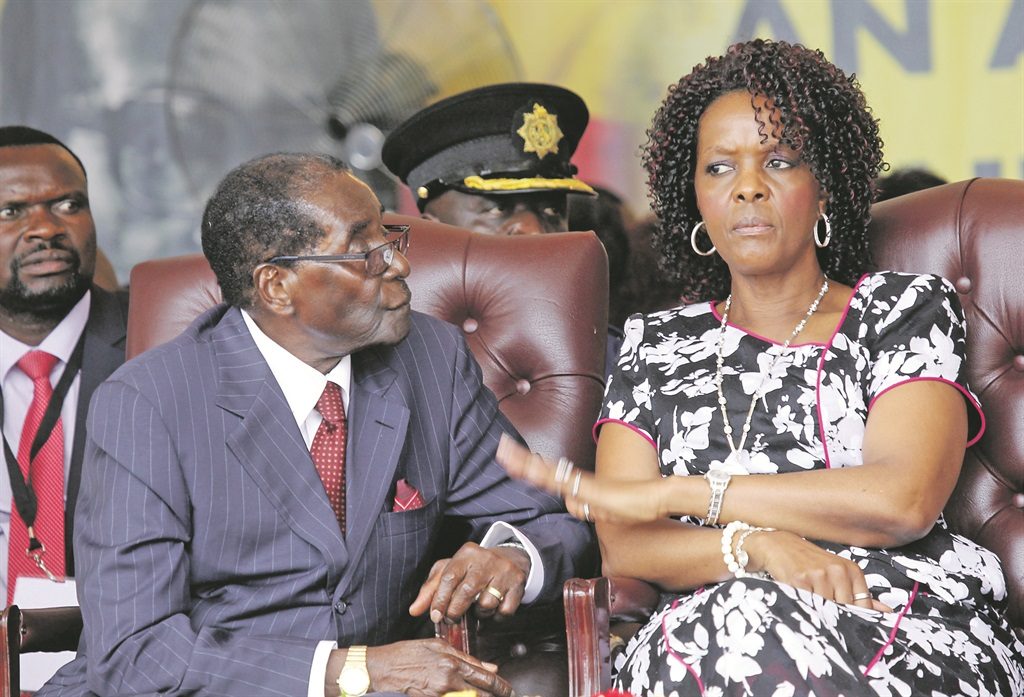 Zimbabwe is under military rule. Its longest serving president, 93-year-old, Robert Mugabe, is under house arrest.

The majority of Zimbabweans hated Grace Mugabe, their First Lady. The coup was staged because senior military figures rejected Grace who allegedly had plans to succeed Mugabe.

The military stressed that it was not a takeover but they were just “restoring Zimbabwe’s democracy”. Democracy died in Malaysia years ago. We have one-party rule, since Merdeka, which was 60 years ago. Time to change and do things differently!

The 52-year-old “First lady” is dubbed “Gucci Grace” and was unpopular with many Zimbabweans. She leads an opulent lifestyle, spends millions of dollars on jewels, cars and mansions. Before the travel ban, she had been a regular in London’s luxury shops. Oh dear! She sounds a familiar figure!

“Gucci Grace’s” lavish lifestyle angered her countrymen. They struggled to survive. Many were starving and a loaf of bread, cost Zimbabwe $50 trillion but in reality, it was worth around USD$2.50.

Many people were furious when Grace, the leader of the G40, manoeuvred herself into position to succeed Mugabe, who had fired his deputy Emmerson Mnangagwa, earlier this month.

The G40 is a group of cabinet ministers and officials who are in their 40s and 50s. They were not involved in the fight in Zimbabwe’s “Liberation Wars” of the 1970s, to end white-minority rule in Rhodesia.

Grace is believed to have fled and taken refuge in Namibia  but this has not been confirmed. Mugabe is confined to his home. The 75-year-old Mnangagwa, who is a veteran of the 1970s “Liberation wars”, has returned from exile.

Mnangagwa was dismissed when he opposed Grace, because he said that she was ‘plundering the country’.

When Mugabe accused Mnangagwa of using witchcraft to oust him, the deputy had no choice but to flee the country, taking his family with him. He vowed to return and lead a rebellion against the Mugabes. He boldly announced that the country’s war veterans and armed forces supported him.

Before going into exile, Mnangagwa warned Mugabe that Zanu-PF was ‘not personal property for you and your wife to do as you please’. Oops! Again, this sounds familiar to Malaysians!

Gucci Grace hated by her own people

“Gucci Grace” is 41 years younger than Mugabe. She worked as one of his typists and had an affair with him, at the time his first wife was seriously ill. Oh no! Not again!

Mugabe is alleged to have wooed Grace over tea and scones and married in 1996, in a lavish ceremony. She has three sons, including one from her former marriage.

Her sons, with Mugabe, Chatunga and Robert Jr, are well-known for their hard partying and like to boast about their opulent lifestyle on social media. The most recent video posting was of Chatunga pouring several hundred pounds worth of champagne over a £45,000 diamond-encrusted wristwatch. Do they have spare cash to purchase film companies?

Grace and her sons are despised for flaunting their wealth. She has homes in Dubai and South Africa, used £3 million of state funds to pay for her daughter’s wedding, and owns a £300,000 Rolls-Royce. Familiar. Familiar. Familiar….did she also import hydrangeas for the wedding?

Grace’s private life is full of controversy. Last month she sued a diamond dealer who had failed to supply her with a 100-carat diamond she claimed she had paid for. We love the colour pink!

She has demanded that a journalist be detained for claiming that she donated used underwear to supporters. We sack ours for being disobedient and non compliant. Or we charge them with sedition, then jail them and say it is for their own protection!

When Grace was in South Africa, she invoked diplomatic immunity to avoid being charged with assault on a model. Same Standard Operating Procedure (SOP) was used to fly someone from America, via London, to Putrajaya.

She is known for being a shop-a-holic, and her marriage was initially marked by her charity work. She increasingly involved herself in politics and in 2014, was made the head of the ruling ZANU-PF party’s women’s wing. Hadi would never stand for that…a woman’s place is in the home! Making babies!

She is a keen supporter of Mugabe and declared, “They say I want to be president. Why not? Am I not a Zimbabwean?’ Yes indeed, Marie Antoinette! 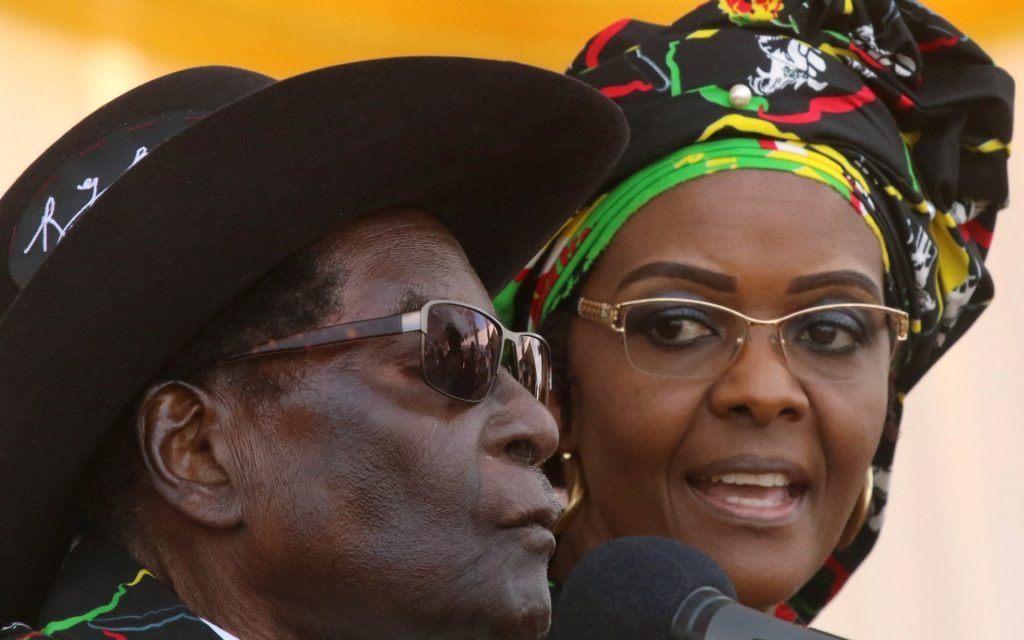 Zimbabwe’s longest serving president ruled with an iron fist. His presidency was dominated by murder, violence, torture, bloodshed, persecution of the opposition politicians, intimidation and vote-rigging on a massive scale. People disappeared or were killed in car crashes. These sound familiar!

Mugabe outsourced his dirty work and violence to the bullying  henchmen, the “veterans” of the guerilla war against the regime of the white Ian Smith. Same here. We don’t have whites, just red shirts. Also an army of cyber-troopers, some of whom are now rebelling, because they were given cap cipluk power-banks.

They attacked and often murdered white farmers, burned their homes, looted their possessions, occupied and confiscated their land. We call them GLCs here. They take over Orang Asli and East Malaysian indigenous people’s ancestral lands.

Under Mugabe’s rule, the once prosperous and thriving “Bread basket of Africa” descended into chaos and poverty. The economy was ruined, many people were starving and struggling to survive. There were widespread anti-government protests, opposition challenges and international sanctions. All were violently suppressed. Ditto except for the sanctions.

Mugabe was suspended from the Commonwealth, which he called “an Anglo-Saxon unholy alliance” because he had rigged the voting in his re-election. We rig ours too, but the Commonwealth needs us because we are a “moderate Muslim” nation. Moderate in name only. Anyway, Britain needs our money because we buy their arms, planes and missiles.

The land grabs helped to destroy the economy, when fertile lands were neglected, and the inability of the veterans to manage the lands, led to acute food shortages and crippled the economy. We are so focussed on industry, construction and oil palm, that our food security is at dangerous levels. Who cares because the elite can fly off to Europe and dine on champagne, caviar and wagyu.

In many cases the fertile land went to wrack and ruin, leading to acute food shortages and a dramatic downturn in Zimbabwe’s economy.

Mugabe was paranoid and imagined that his opponents were going to kill him. He retaliated by silencing those who opposed him, with violence shutting down newspapers. Parallel universe!

The Zimbabweans want to rebuild their country, but some are wondering if the equally ruthless Mnangagwa, who is called “The crocodile”, is going to be any better than Mugabe. Oh dear…we have the same power tussle.

I know what some of you are thinking. You wish that a similar outcome, to the opposition to “Gucci Grace” could happen in Malaysia. Naughty! Naughty! 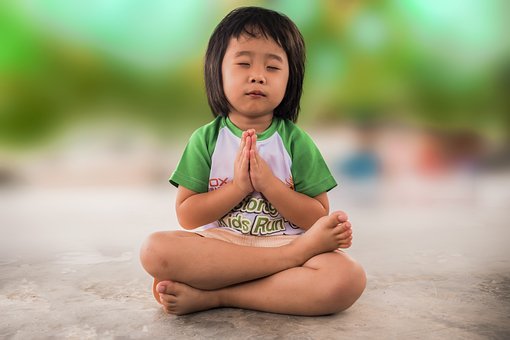