The terrible duo of disgraced Najib Abdul Razak and his equally contemptuous lawyer, are taking turns to delay Najib’s trial.

Najib’s RM2.28 billion 1MDB trial, which was scheduled for tomorrow and Friday, has been postponed to next month.

The latest excuse is that Najib’s lawyer, Muhammad Shafee Abdullah has a son, Muhammad Farhan, who is getting married in Penang.

Shafee’s feeble excuse is that he has to be involved in the wedding preparations. Really?

Do you recall, when Najib’s daughter had a wedding celebration in Kazakhstan, the government jet was allegedly used to fly him, and his entourage which comprised his family and his cronies, for the wedding celebrations arranged by his son-in-law’s family. He was desperate to keep this cosy transport arrangement hush-hush because the Malaysian taxpayer was funding the trip.

Now that Najib wants a delay, the personal family details of Shafee’s son’s wedding is made public knowledge so that the weak amongst us, will say, “Anak lelakinya kahwin. Biar lah. Hari bahagia sekeluarga. Tahniah. Syukur pada tuhan.”

Don’t take us for simpletons.

Come next month, the delay might be “Sakit-perut lahh….still got food poisoning from the caterer.”

Perhaps, after that, it will that he or Najib has Coronavirus?
Or will the “My dog bit me” excuse, be used again?

Or will it be a funeral this time?

Or the dog ate the case notes?

Or the notes were washed away in a flood, or the laundry.

So what’s next in the excuse category?

That it is April Fool’s Day?

Najib-Shafee aim to delay the trial because of the following reasons:-

First. To make people angry with the judiciary.

This is an attempt by Najib-Shafee to make people think the judges and courts are incompetent for allowing the delays.They want to make a mockery and a farce of the trials and the judicial process, for obvious reasons.

Second. To make the rakyat think Pakatan Harapan is hopeless in bringing the corrupt to trial.  This is Umno-Baru propaganda.

In first world countries, the corrupt would have been tried within a more or less fixed time frame (there is probably a formula to work out these things, depending on the severity of the crime), but Najib-Shafee is making Najib’s trial a never-ending process.

Solution: Be very firm with Najib-Shafee. If Shafee cannot make it, his team of lawyers should be able to.If Shafee can’t be more responsible as a laywer, there must be a method to discipline him. One delay is a fluke. Twice is a coincidence. But three is a trend.

If Shafee’s son’s wedding is in three days, time, why does he need eleven days off and not just the day itself?If Shafee knew that he was going to Penang, he should NOT have taken the case.

Why didn’t Shafee inform the court of this wedding delay earlier? Why suddenly spring it on the court?

In Malaysia, weddings are known months in advance. This is not a shotgun marriage, but it appears the courts have been taken for a ride by Shafee-Najib, again, and given this “emergency” “I need to prepare for my son’s wedding.”

Shafee has three wives. Why can’t the wives and in-laws play happy families and help-out in the preparations?

If Pakatan Harapan cannot control one man, Najib  – and his many dramas and time-wasting, the rakyat will think that the coalition cannot lead the nation.

Get real Pakatan! Najib is making you look like a bunch of idiots, not that we need much convincing.

Three. A week’s delay here and there will eventually bring the trials and/or judgement close to GE-15.

As it gets closer to GE-15, there will be more excuses coming from Najib so that he can go campaigning. He will also use his “Cash is King” SOP in an attempt to woo voters to vote Umno-Baru/BN.

Solution: Why can’t Najib be given free accomodation, free food, a nice orange jumpsuit and be kept on remand, so that there can be NO more excuses for more delays.

Najib’s stigma and discomfort of being in prison, with cockroaches for company (like Hishammuddin Rais had to endure) will make him wish the trial was over and done with quickly. The court should try this tactic instead of playing the “kesian Najib-Shafee” angle. Both showed no mercy to the rakyat when Najib stole our money.

Four. Once they regain power, Umno-Baru will wipe the slate clean and Najib and the former self-styled First Lady of Malaysia (FLOM) will be cleared of any wrongdoing. If they are in jail, they will be released.

Solution. The judiciary needs to get its act together and be firm. The delays hurt their reputation most. The rakyat’s reputation is not affected nor, does it dent mine, either. The judiciary will be thought of as useless, and a throwback from Umno-Baru days, for dragging its feet  in punishing Najib.

As for Pakatan, is it any wonder the rakyat is losing their confidence in the administration and foreign investors rush to our neighbours, like Cambodia and Vietnam to put their money and build businesses there?

Revoke Najib’s bail and keep him on remand. The nation is restless. The delays will cost Pakatan votes, more than the incompetence of its ministers choosing shoe colours, buildings are collapsing here and there, or its failure to build adequate flood defences. 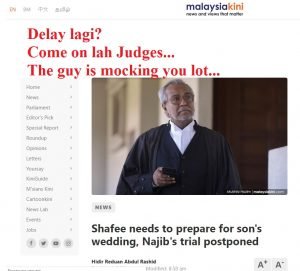