If you did not know that  27 January is Holocaust Memorial Day, please read about it online.

Or go to your library.

Or ask your teacher…he/she should know.

Many Malaysian schoolchildren have not heard of the holocaust. Some don’t know about  World War Two, either. 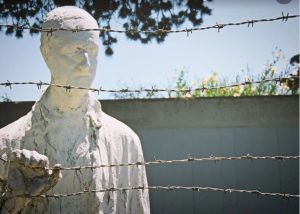 The holocaust is about Europe’s darkest days, when mankind sank to its lowest depths. When human values were turned on its head.

Holocaust Memorial Day marks 75 years that have passed since the death camp in Auschwitz was liberated by the Soviet army on 27 January, 1945.

Have you heard of Auschwitz? A concentration camp, where people were sent to be tortured, gassed and killed. Whole families were exterminated. Of 1.3 million Jews sent to the  Auschwitz-Birkenau camp, about 1.1 million died.

There were other camps too.

Do you know about the gas chambers?

Or the train tracks transporting humans in cattle wagons, to take them to their deaths. Most of the people murdered by the Nazi German forces at the camp were Jewish, but Poles, Russians, Gypsies (or Roma). Homosexuals and political dissidents, were also imprisoned.

The Nazis wanted a superior race. They murdered the people who did not fit their image of the ideal superior race – the Aryans – the master race. In the holocaust, 6 million Jews were killed.

Forced starvation and lack of medical treatment killed many people.

Today, at the museum in Auschwitz, mountainous piles of hair that was hacked-off the heads of victims before they were sent to the gas chambers, are a chilling reminder to us about our barbarism.

Gold teeth were pulled from the mouth of the victims. The guards collected 10 to 12 kg of gold per month from the victims’ teeth.

The victims were also robbed of their jewellery.

Piles of clothing were left on the floor, when the victims were told to strip naked, before they were gassed. Then cremated. The clothing was re-used for the next lot of victims.

Auschwitz is a story that should never be allowed to fade from our memory.

When soldiers freed the victims, they also found bodies lying everywhere. One soldier said, “When you see people, they looked like skeletons with skin on them…”

Stand up, instead of staying silent, when you see discrimination, intolerance and injustice.

Speak-up instead of walking past and doing nothing.

Do not encourage hatred by your silence and inaction.

Below is a powerful video (it is not mine) to reinforce the message of standing-up together.

Do NOT let history repeat itself. Let us learn from our past.

Do not let another holocaust such as the genocides in Cambodia, Rwanda, Bosnia and Darfur, to happen again.