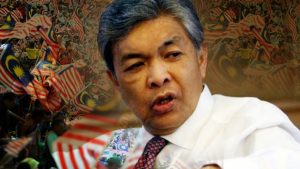 Malaysians don’t want to jump from the frying pan into the fire, and trade one form of oppression, for another.

Malaysians are disappointed that the opposition coalition is fragmented and bereft of ideas. At a time when Umno Baru is splintered, and the scandals mount, the Opposition is as good as useless.

When former Law Minister Zaid IbrahimÂ urged Ummo-Baru members to dump Najib Abdul Razak, and install Zahid Hamidi, as prime minister, the rakyat was outraged. This would be an eye-wateringly irresponsible move for the following reasons.

With Zahid, it will be like going to a supermarket and getting a “Buy One, Get One Free” (BOGOF) item.

Can the rakyat forget Zahid’s obnoxiousÂ daughter Don’t for one second imagine that she will shut up when ‘papa’ is PM. Umno-Baru is bad enough as an institution, but for the premiership to be like a family-run business is enough to make Malaysians more depressed.

If the sole purpose of the “Save Malaysia” campaign is to remove Najib, then it is rendered meaningless, because Umno-Baru is as much a part of the problem as Najib. The PM’s removal is not sufficient, because the system which Umno-Baru perpetuated is broken. The system needs fixing, and Zahid is not the one to do this.

Scraping the bottom of the barrel.

Last week, Zaid urged us to give Zahid a chance because he (Zahid) “could not be worse than Najib”. Remember a few years ago, when Najib replaced former PM Abdullah Badawi, some said that Najib could not possibly do any harm. Look at how Malaysia has slid down the slippery slope.

Crooked politicians all over the world are known to outsource their dodgy dealings and violent tactics to thugs and the criminal underworld. Remember how Zahid Â defended the Malay gang, Tiga Line, and said they were harmless? This is tantamount to Obama saying the Mafia are “legitimate businessmen”.

In January 2015, Zahid Â wrote a letter to the Federal Bureau of Investigation (FBI) to say that the gambling kingpin, Paul Phua, had provided valuable services in the defence of Malaysia’s national security. Phua had allegedly started an illegal gambling syndicate in America, and despite the PDRM saying that Phua belonged to the 14K triad, Zahid defended him. A man who is a poor judge of character should not be the PM.

Can anyone recall Zahid criticising Najib for his involvement in the RM4 billion donation and the 1MDB scandal?

Some political analysts believe that Zahid is more conservative than Najib. Political commentator, Liew Wui Chern, alleges that Zahid may have been responsible for Najib’s U-turn on the abolition of the Sedition Act 1948, and also had a hand in replacing the Internal Security Act 1960 (ISA) with the Security Offences (Special Measures) Act 2012 (Sosma).

Successive leaders have milked the nation dry and transferred their wealth offshore. It was alleged that in 2012, Malaysians accounted for 17% of people buying up new, exclusive London properties. How convenient to hide one’s ill-gotten gains in the form of property. Malaysia needs a new breed of principled leaders.

Best man for the job.Â

Why should Malaysians settle for second best? Our system has been corrupted, through successive generations of Umno-Baru/BN hypocrites, who feathered their nests and ignored the rakyat. For decades, we suffered.

If we have to wait a few more years for the best man, or woman, for the job, we will.Â