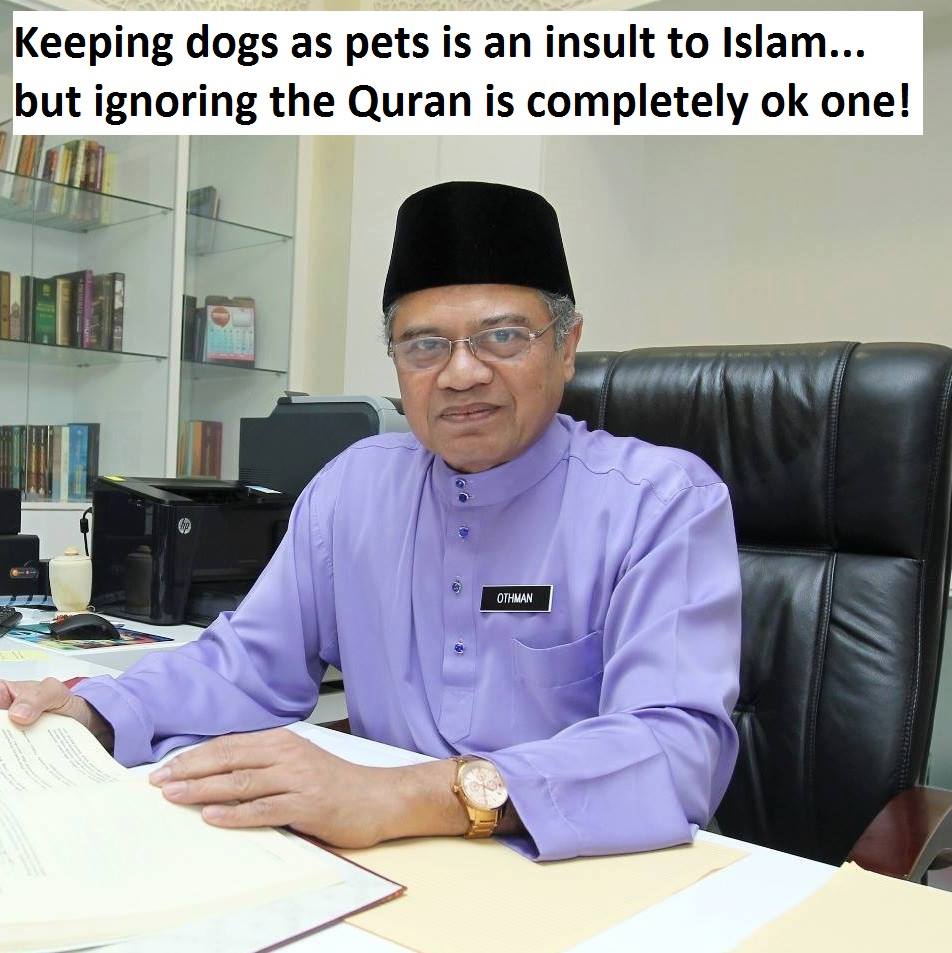 I read your statement to the young lady, Nurhanizah Abdul Rahman, earlier today. May I congratulate you on the soft and diplomatic language you employed towards her. That, my dear Tan Sri Dato Hj, is the language of the Prophet, rahmahlil ‘alameen (a mercy unto the worlds, Quran Chapter 21 Verse 107), so thank you for following the sunna of the Prophet there.

However, it is also the sunnah to use one’s reason (akal). In fact, the Quran tells us that the worst of beasts are those who do not use their reasoning (8/22). I feel that, in the issue of forbidding of dogs as pets, the orthodoxy has not used their reasoning effectively.

First and foremost, in your statement towards Nurhanizah, you did not once mention any Quranic evidence. As a Sunni Muslim, the Quran should be your first port of call, yet you did not even look at the mere six verses regarding dogs! How is this possible, Tan Sri Dato Hj?

On the contrary, He actually declared animals caught and killed by hunting dogs to be halal. Why did He bother to make such a specific declaration, Tan Sri Dato Hj? Think about it, please.

Is it possible for meat procured after a deadly tussle with a dog to be halal if the dog itself is ‘najismughallazah’ (heavy impurity)? The dog’s saliva, possibly blood and definitely wet fur would have made contact with its prey and yet the prey is halal to eat but the dog itself is a heavy impurity! Come on now, that does not make sense at all!

Furthermore, in the story of the companions of the cave (ashab al-kahf), the dog is their constant companion! God did not say he was a hunting dog or taken to guard farms or what not. He was simply their companion and guess what, in one verse(18/22), he is actually mentioned three times!  This shows a great emphasis on his role in the story.

Lessons from the Quran

As I am sure you know, Tan Sri Dato Hj, the stories in the Quran are meant to be lessons for us, as God says (11/120 and 12/111); so what lesson do you get from this one? That keeping dogs is haram? That is the opposite of what is being told!

Finally, on the hadith which renders keeping dogs in the house as haram. This hadith mentions that Jibreel told the Prophet that the angels would not enter any house with dogs in them. Does this make sense to you?

One of the angels is the angel of death. If he cannot come for you because a dog is in the house, then you will not die. Does this mean that anyone who keeps dogs in their houses will remain alive forever?? This makes no sense whatsoever, Tan Sri Dato Hj!

Hadiths, if taken, must be subservient to the Quran but in this case, you silenced the Quran and took an illogical hadith as evidence.

Dogs are such wonderful, loving companions to us. They can perform functions no other animal can. Why are we denying ourselves this pleasure and benefit when Allah so clearly declared for us, that dogs are neither impure nor forbidden? I urge you to consider this final verse: