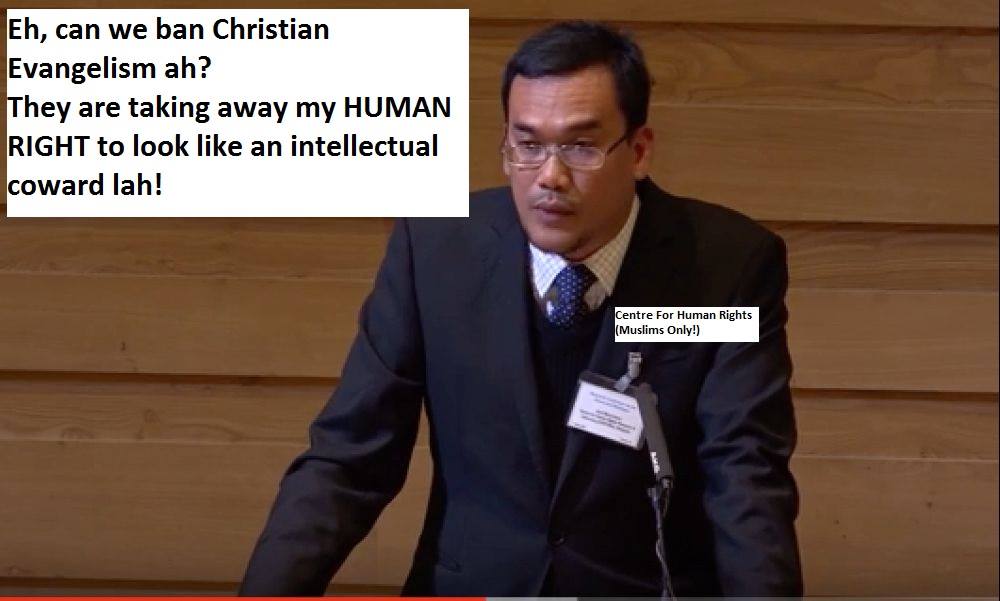 I have a suggestion – CENTHRA needs to be renamed. Not a major renaming, mind you.  From ‘Centre For Human Rights Advocacy’ to ‘Centra For Human Rights Attackers’. They can still be called CENTHRA, except ‘Attackers’ would be far more accurate for the ‘work’ they do.

This organization is a den of snatch thieves or penyamuns and their target is your human rights! They pretend to be advocates of human rights but in reality, they advocate for the rights of Islamofascistsalone!

Now they have got on the Kamarul Yusoff anti-Christian bandwagon. That political desperado made a pathetic attempt to score political points last month when he claimed that Hannah Yeoh’s autobiography was making him sway towards Christianity!

After the nation’s laughter had died down, now CENTHRA has come to take over this cheap political game – they want Christian Evangelism banned!

Their reason? Christian Evangelism is preaching actively to the Muslims!

“In Malaysia, the dangerous movement that is evangelicalism must be kept in check as it threatens religious harmony in Malaysia,” said CENTHRA CEO Azril Mohd Amin on Utusan Online today.

Can we also ban Perkim, Abim Outreach and all the well funded dakwah organizations then? Let’s see if Azril stands up for human rights for all!

This is not the first time Azril put forward his twisted view of human rights. Early last May, Azril whined when it was proposed that both parents consent is needed when converting a minor to Islam.

No such thing is required for other religions, he said, forgetting that to deconvert from Islam, one needs to jump through hoops and probably get sent to akidah rehabilitation camps like Revathi Masoosai about ten years ago!

Now Azril wants Evangelism to be banned. Apparently it disrupts the harmony of the nation.

It’s funny that the rights and freedom of Christians disrupts the nation’s harmony, but did we hear a peep from Azril when Zakir Naik rode into town and started converting minors on televised programs! Why is that ok, Azril? I thought you stood up for human rights, not only the rights of some humans?

The reason is simple: Evangelism may convert other groups to Christianity and the Islamofascists fear this. They are simply not intellectually equipped to handle such challenges so their best option is to call for a ban.

Organizations like CENTHRA are nothing but Islamofascist outfits. They wish to take away our rights , not stand up for them. They need to be ignored, if we, the Rakyat, are to attain a unified, secular Malaysia.

Farouk A Peru, Islamologist and author