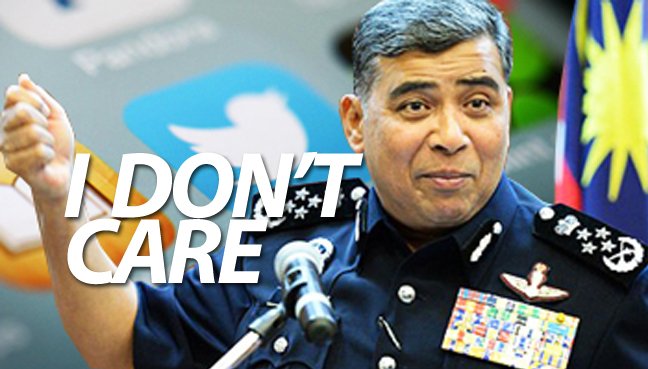 According to FMT, the IGP, Khalid Abu Bakar, has blamed intense publicity over the abduction of Pastor Raymond Koh Keng Joo, for hampering investigations into the case.

Really? So if we had kept quiet, and not asked questions, would he have found the pastor by now?

In truth, isn’t the IGP more anxious about his incompetence and public opinion, into his handling of this abduction?

On the day Pastor Koh disappeared, and soon after a report had been lodged, did the police trawl through the CCTV recordings of the roads which branch off the carriageway where the pastor was abducted?

Malaysia is one of the most “closely monitored” nations in the world. Remember how we were told in the Teoh Beng Hock case, that the CCTV had malfunctioned. In some deaths in police custody cases, the CCTV was conveniently pointing the other way.

Khalid said, “Too much speculation in the media could endanger the victim. I am worried, because our investigation is at a stalemate as we don’t have further information on the missing pastor.

“There’s no lead now. I’m with the family. We are worried too.”

Lashing out at the public shows the IGP’s desperation. He acts like he is clueless.

Khalid claimed that the people who abducted Pastor Koh, were “very meticulous” and that the publicity surrounding the case was hampering investigations.

He said, “When people keep blabbering till the whole world knows, we can’t tell what has become of him.”

Why did he keep mum on the investigations. Did he make a nationwide appeal on mainstream media for the public’s help? Despite the CCTVs dotted along the roads in KL, the police cannot find at least one car that was in the convoy which stopped Pastor Koh on 13 February.

Three reasons for his sacking, although there are more.

I have written countless times, urging the IGP to resign, or the Home Minister or PM, to sack him.

Three reasons will suffice, for now.

Cannot or will not?

Was the IGP trying to “protect” Maria from coming to harm? Do we hear a flock of pigs flying overhead?

Why only now? Was he afraid of the bomoh casting a spell on him?

The IGP attacks the public because they criticise his incompetence.

If the authorities want the rakyat to regain its trust in the police force, the IGP should resign… or be sacked.