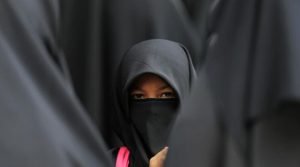 The Malay who talks about the injustice meted out to non-Muslims, or who writes about hypocritical, double-standard Malay Muslims, is NOT bashing his own race, nor is he denigrating Islam.

Malays, in particular, refuse to acknowledge that most critiques are not about the religion, but are in fact criticisms of the Malays who have misinterpreted a particular phrase, or religious edict.

Something is wrong when Muslims who commit crimes,  like some of our corrupt leaders, make several visits to Mecca, for umrah or the haj to “cleanse” their souls.

No! They cannot treat Mecca and Medina like a big spiritual washing machine, to launder their blackened souls.

Many Malays appear to see the conversion issue as a numbers game.

Hasan Ali, the former Selangor exco member, caused panic within the Malay community when he alleged that Malays were being converted by solar-powered talking Bibles .

The hysteria he whipped-up among the Malays damaged community relations. He failed to produce a single Malay who had been proselytised. So, what were his reasons for making the Malays angry, and why was he not punished for threatening national harmony?

Colleagues in some womens’ NGOs, claim that many Malay women, who are victims of domestic abuse, get little help from their own communities. In the past, the police rarely wanted to get involved, so these women reluctantly approached Christian shelter homes for refuge.

This was done as a last resort, because people of their own faith and race, rejected their requests for help.

So, can you blame Malay women who after years of abuse finally find temporary relief and moral support from a Christian home?

One non-Malay who helped a Muslim lady, found her home being surrounded by Malay men who threatened her and warned her to stop interfering. This type of story is rarely reported.

When allegations are made about Muslim proselytisations, all hell breaks loose in Malaysia.

But, when Muslim clerics convert children, without their parents’ permission, in rural schools in Sabah and Sarawak, or in the Orang Asli boarding schools in semenanjung, the Muslims who criticise Malay proselytisations are silent.

Quick to blame others

If the Malays cared to look in the mirror, they would see that they are the ones who bring disgrace to Islam.

In their eyes, it is always the non-Muslims’ fault. Or the fault of the Opposition, the DAP, the Christians, the Jews, the Singaporeans, the foreigners. Never them!

Apart from lack of personal accountability, where is the Malay sense of self-worth?

Some Malays criticise a woman’s dress, her drinking habits, the company she keeps, her desire to enter a beauty contest, her wish to be a gymnast, or her love for animals, including dogs.

The same critical Malays keep quiet about corruption and injustice. Why?

Some Muslim women spend a small fortune on religious classes in a particular part of town, because they are taught by a celebrity ustaz or ustazah. Please look around you and take note of your surroundings. There are many suffering people, both Muslim and non-Muslim.

Reducing Islam to a low point.

Some Muslims look down on others. They are like an extension of the footballers’ wives who must be seen with the right people, wearing the right clothes, using the right accessories and driving the right cars. Has Islam been reduced to such a low point?

A practising Muslim need not abandon his reasoning and intellect. When a cleric, or a religious authority, does something which appears ludicrous, will the average Malay speak out? Will you?

When the Perak mufti said that wives could not refuse sex if their husbands demanded it even if they were on a camel , his comments sparked a firestorm, but where was the criticism from his peers?

This mufti calls himself a learned scholar.

A mother M Indira Gandhi, was denied access to her youngest daughter whom her convert husband kidnapped and converted, nine years ago. She and her children are victims of Muslim arrogance. Her constitutional rights of a Malaysian and a mother were brushed aside.

Yesterday, in a landmark decision, the Federal Court ruled in Indira’s favour. The inspector-general of police, Fuzi Harun, must now track down her ex-husband K Pathmanathan @ Mohd Ridhuan Abdullah, and arrest him for taking Prasana Diksa in 2009, when she was only 11 months old. The former IGP, Khalid Ibrahim, claimed that he was confused between previous syariah and civil court judgements. He should have been sacked.

This is what happens when we are governed by a two-tiered system of laws.

For nine years, Indira suffered because few Muslim judges will serve justice for her, because his career will come to a premature end if he does not bow to the will of his political masters.

Malay bloggers and websites like to predict that majority of Muslim women will go to hell. Why? They must have a hot line to God.

The Muslim woman’s voice is muted

On Sunday, 28 January 2018, the Islamic Renaissance Front (IRF) held a forum at The Concorde Hotel, Kuala Lumpur. The talk was called “What is wrong with Islam now?”

Why did they fail to invite women to speak at this forum? Does the Muslim woman’s voice not count? What does that say about the Muslim community, in Malaysia, if the progressives in IRF also fail to acknowledge women? Having suppressed the woman’s voice, they then wonder what is wrong with Islam.

If we are afraid to be criticised, we are not ready to make real change.

In Malaysia today, many Malays use Islam as a personal show, rather than a personal practice.

Are you one of them?