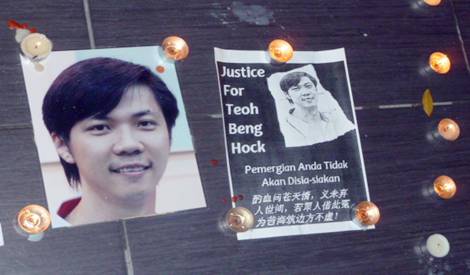 Teoh was found dead on July 16, 2009, on the fifth floor of Plaza Masalam in Shah Alam. He was called by MACC the day before for interrogation over his employer’s alleged abuse of state funds.

At the Royal Commission of Inquiry (RCI) into his death, the MACC laywer, Muhammad Shafee Abdullah accused Teoh of tarnishing the family name for RM2,400.

These questions were asked at the time:

Why did the MACC panic when Teoh’s body was found sprawled several floors below from where he was interviewed?

Why was there an appreciable delay in making the police report once Teoh was found?

Why did one of the MACC staff stop by his home in Puchong, to warn his wife and family of the dangers to their personal safety?

Remember when Najib Abdul Razak met Teoh’s family members at Putrajaya on 28 July 2009 and said, “No stone will be left unturned in finding out the real cause of death and, if there is any foul play, action will definitely be taken.”

Hah…. why should we trust Najib with these words, which we can associate with lies, more lies and cover-ups.

During the farcical inquest into Teoh’s suspicious death, the MACC lawyer, Abdul Razak Musa grilled  Dr. Pornthip Rojanasunand, the Thai pathologist, and gave the whole world a hilarious demonstration of how not to conduct a cross examination.

Dr. Pornthip said that there was an 80 percent possibility of homicide and 20 percent chance of suicide in Teoh’s death because his injuries are inconsistent with a fall.

In 2011, the coroner, Azmil Muntapha Abas, delivered an open verdict in the inquest into Teoh’s death. The result caused public outcry and a RCI is ordered.

Even in death, the MACC would not leave Teoh Beng Hock alone. During the Royal Commission of Inquiry (RCI), they chose to sully whatever lasting memory Teoh’s poor family have of him by claiming that Teoh committed suicide, to prevent his boss and the DAP, from shame.

The MACC lawyer was Muhammad Shafee Abdullah and he charged that Teoh ‘took his life and chose “death before dishonour” to spare the DAP from charges of corruption’.

Shafee told Teoh’s boss, “Looking at the complexity of the situation Teoh Beng Hock was in, he was under severe pressure because more would be uncovered, he would probably have committed suicide, as an honour suicide and to protect you and the party? As the Chinese proverb goes ‘death before dishonour’”.

Shafee’s despicable attempt to deflect attention from the MACC’s actions, by putting a new spin on Teoh’s death, only shows how desperate both of them are.

How dare Shafee suggest that Teoh had committed suicide, especially when Teoh was unable to defend himself?

Most lawyers deal with hard facts and evidence. This MACC lawyer seems to dwell on guesswork, speculation and conjecture.

If Shafee said Teoh chose death before dishonor, then what is to stop the MACC from committing a murder to spare the organisation from being publicly humiliated?

By insulting Teoh’s memory, the MACC attempted to evade the spotlight on its shady activities.  Its perverse ‘damage limitation’ exercise did not succeed.

Many questions remain unanswered, till today.

Despite telling reporters that he would issue a statement about the recent Sarawak Report RM9.5 million allegation, he has failed to do this.

A simple “Yes” or “No” answer would suffice.

If he did not receive the money, then just deny it.

If Sarawak Report was making mischievous allegations, then he should take SR to task.

Shafee was quick to accuse Teoh of committing suicide over RM2,400, and yet RM9.5 million has rendered him speechless. 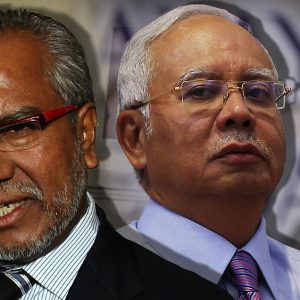