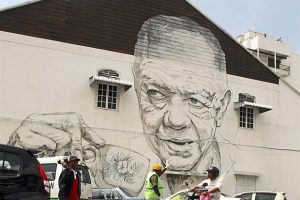 Religious fanatics and kleptocrats have one thing in common. They fear cartoonists and artists who wield the pen/brush.

Kleptocrats impose travel bans or charge them with Sedition.

What do Zunar and Lithuanian painter and graffiti artist, Ernest Zacharevic have in common?

Apart from their names starting with the letter “Z ” both these men have been slapped with a travel ban. Zunar cannot travel outside of Malaysia. Zacharevic is not allowed to enter Malaysia.

There are three exceptions. The controversial preacher Zakir Naik is allowed into Malaysia and practically given the freedom to roam and do as he pleases. The local controversial preacher Zamihan is in charge of de-radicalising extremists! A topsy-turvy world exists in Malaysia.  Zahid Hamidi, the Home minister, who is a friend of Tiga-Line, the Malay triad. 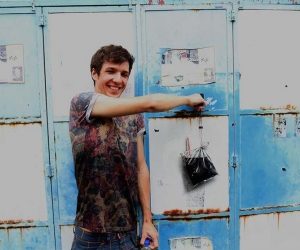 Zacharevic is based in Penang. He received worldwide acclaim in 2012 after creating a series of street art murals for the George Town Festival in Penang.

Ipoh is another good place to view his murals. He caused panic in the Ipoh City Council (MBI) which reacted to the mural which Zacharevic had painted on the wall of an Ipoh shoplot. His painting showed an old man drinking coffee, but to some Malays, the painting resembled Chin Peng, the deceased secretary-general of the Communist Party of Malaya (CPM).

Sinar Harian reported that the MBI would hold talks with Zacharevic to alter the painting. Some Ipoh residents made allegations of a subtle effort to reintroduce communism to Malaysians. Sense finally prevailed, and the MBI did not make any changes to the painting, but why did they entertain bigots in the first place?

Perak NGO Front chairperson Mohd Salleh Mohd Khan made the absurd suggestion that the owner of the building should be questioned, “so that everything is made clear”.

Remember how the Johore authorities removed Zacharevic’s  “Lego”mural because it indirectly referred to the level of crime in the state? 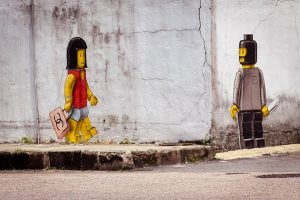 Why did immigration ban Zacharevic from entering Malaysia?

So far, he has not been given a reason, nor does he know how long his ban is for.

Both Zunar and Zacharevic do not need many words to describe the plight of Malaysia, today. Just a handful of pastel coloured sketches, a few strokes of the brush, a few choice words, and the main protogonist lurking in the foreground.

The most deadly weapon in Malaysia, is the artists’ pen. The immigration authorities did not foresee the consequences of banning Zacharevic into Malaysia. They have just given Zacharevic many reasons to mock them and to paint Malaysia in a negative light! 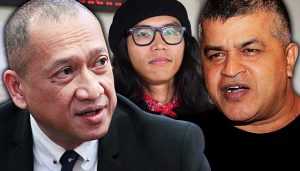 Tourism minister does not walk the talk. Talk is cheap.

At the launching of the “Cartoon and Us” exhibition at the National Museum on 23 January 2018, Tourism Minister, Nazri Aziz, showed a rare display of support for the controversial cartoonists, Fahmi Reza and Zunar.

Nazri urged politicians to stop being sensitive especially when they were mocked by cartoonists. He said, “If you are very sensitive, then you got no business in politics. Remember that you are a public figure.

“If you choose not to be criticised then stay at home. If you want to be involved in politics you must know what is coming.”

How ironic that Nazri told the politicians to stay at home, if they could not take being mocked. Would he dare tell that to MO1 and FLOM?

How about advising the Home Minister, Zahid, to lift the travel ban on Zunar? Talk is cheap, Nazri!