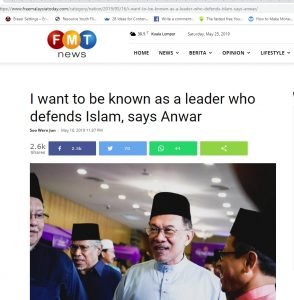 Will the real Anwar Ibrahim stand up?

Anwar Ibrahim  seems to have one face for speaking in Malaysia and another for speaking when he is abroad. So, who is the real Anwar, and can we trust him?

If he cannot contain the two factions baying for blood in his party, what chance has he got of uniting a divided Malaysia? He was an architect of this division, in the 80s and 90s.

If he allowed the in-fighting between him and his deputy to spill out onto the streets, what does that say about his qualities as a leader?

He should want to be known as a leader who unites the country. Not just one who defends Islam, a part of the population. 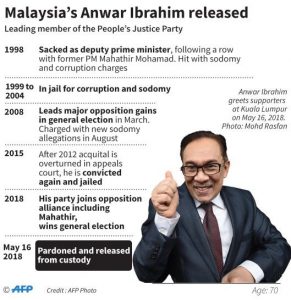 Their leader, Anwar Ibrahim, told England’s newspaper The Guardian that he would “root out corruption and end a system of affirmative action for ethnic Malays” if he were to form the next government.

On 17 May , he told Associated Press (AP) that affirmative action policies for Malays must be discarded in favour of a new programme to help the poor, regardless of race.

Anwar said, “I have said that the NEP should be dismantled, but the affirmative action must be more effective. I believe that poor, underprivileged Malays will benefit more through a transparent, effective affirmative action policy than the New Economic Policy which has been hijacked to enrich a few cronies.”

Politicians make all sorts of promises, many of which they know they cannot keep. Why should Anwar be any different? What a pity that in Malaysia Baru politicians continue to pander to the ultra-sensitive Malays.

So, how does one unite a nation, when one section of the community is treated like ‘Little Emperors’, while the rest of the population is told to get on with the limited resources available?

On 13  January, at a dinner to celebrate his win as president of PKR, Anwar urged the non-Malays to understand the concerns of the Malays and bumiputeras who feared that their rights and position would be threatened.

Instead, Anwar should have highlighted the betrayal and exploitation of some Malays by other Malays. He should have mentioned Tabung Haji, Felda, Mara, the silence of the previous Malay-majority cabinet about the scandal involving 1MDB, and embezzlement in the various ministries by senior civil servants. Malays were at the helm of these institutions.

For decades, PAS and Umno-Baru made the outrageous claim that the non-Malays, specifically the Chinese, wanted to destroy the nation, make it Christian and get rid of Islam and Muslims. The real enemy is within the Malay fold. We have yet to investigate the alleged corruption of the money donated to mosques, or tahfiz schools, which will open another Pandora’s Box.

Affirmative action policies make Malays weak, arrogant and dependent upon handouts. If the selection criteria for army recruits were to be lowered, we would have snowflakes defending the nation. A lowering of the examination pass mark, for the Malays, is self-defeating. The Malays cannot thrive in an environment which stifles competition and creativity. In the law of the jungle, only the fittest and those who are willing to adapt will survive.

In his monthly assembly speech at the Prime Minister’s Department, Dr Mahathir Mohamad said that Malaysia had not achieved true unity ‘despite six decades of independence, because each race wanted to maintain their own culture and heritage’. He said, “We accept the fact that we cannot be a country where the people identify themselves as one race.”

Mahathir is confused by the definition of “race”. How can the rakyat identify themselves as Malaysians when they are discriminated against with race-based policies for housing, schools, universities, business loans and more. Get rid of affirmative action policies and help all Malaysians, irrespective of skin colour or religion. Get rid of the bangsa and agama (race and religion) on our identity card.

The taxi drivers seem to think so. Najib could not help them, nor Mahathir. Taxi drivers fail to comprehend that they need to change their attitudes, to improve customer service. They think Anwar is their last bastion of hope.

During his five-day working visit to India, Anwar told the Indian newspaper, The Hindu, that his wife, and the DPM, Dr Wan Azizah Wan Ismail would vacate her position when he became PM.

He said, “Yes, she has said she wants to step down when I assume office, because she feels it will not be proper. She will continue to play her role, especially for health and culture and welfare.”

Did she really say that she will step down? Or was Anwar speaking for her?

The threat of nepotism means that many very good people will not want to work for the party. They know they will not progress far. Few people are prepared to criticise the boss’s wife or daughter. Already, PKR is known as “Parti Keluarga & Rakan-rakan”.

After 14 months, the new Pakatan Harapan administration should have addressed serious issues concerning welfare and women and children’s rights. They seem to have avoided those issues, especially in matters pertaining to child marriages, treatment of single mothers who have been wronged by the system, lesbians who have been whipped, and transgenders who have been murdered. Can a dutiful Malay wife go against her husband’s wishes?

In 2008, Anwar said he wanted to end affirmative action policies. Earlier this year, in January, he urged non-Malays to understand the concerns of the Malays. Can he make up his mind?

We all know this. Why not tell us something new?

When will he remove this millstone round Malay necks.