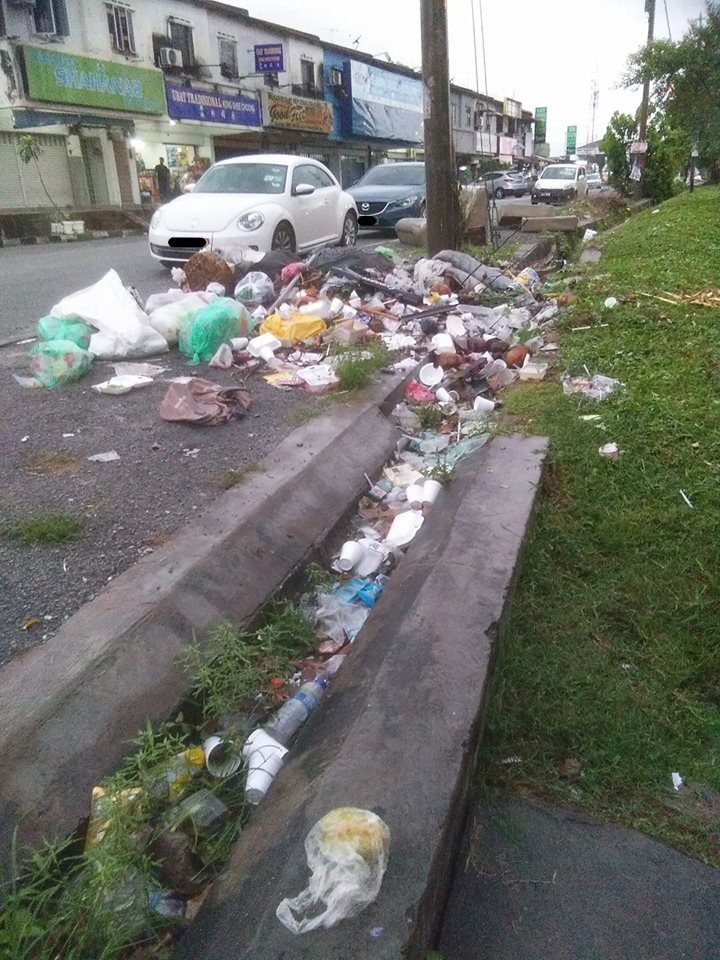 When the Datuk Bandar of Ipoh Zamri bin Man took office in 2015, I congratulated him on his appointment even though I was against the policy of appointed mayors and councilors. Then I asked him what his vision for Ipoh was. He did not respond. Instead, he declared that he would make Ipoh a clean city. It was the “Cleanest Town in Malaya” once upon a time. So Zamri was going to bring back Ipoh’s glory days – in cleanliness if nothing else.

Since then, he has tagged on “Green and Progressive” – hence the tag, Clean, Green, Progressive. Perhaps that’s his vision.

But to digress a little, why not “Ipoh the Town that Tin Built” which has always been our call name. Instead, every mayor brings with him, his own name – Bougainvilla City, Virtual City etc etc. Perhaps these people not being true blue Ipoh Mali do not have the sense of history and pride in Ipoh.

After receiving complaints from as far as London (yes, Ipohites are everywhere) that the city is filthy, I decided to take a look.

Sometimes it takes an outsider to see what we don’t see. Perhaps we have become blind and inured to the filth that is around us. Pigs don’t know they are living in filth. And for once in a long time I saw what the complainants saw, a filthy, dirty city of clogged drains, litter-strewn streets and furniture and junk dumped by the roadside. 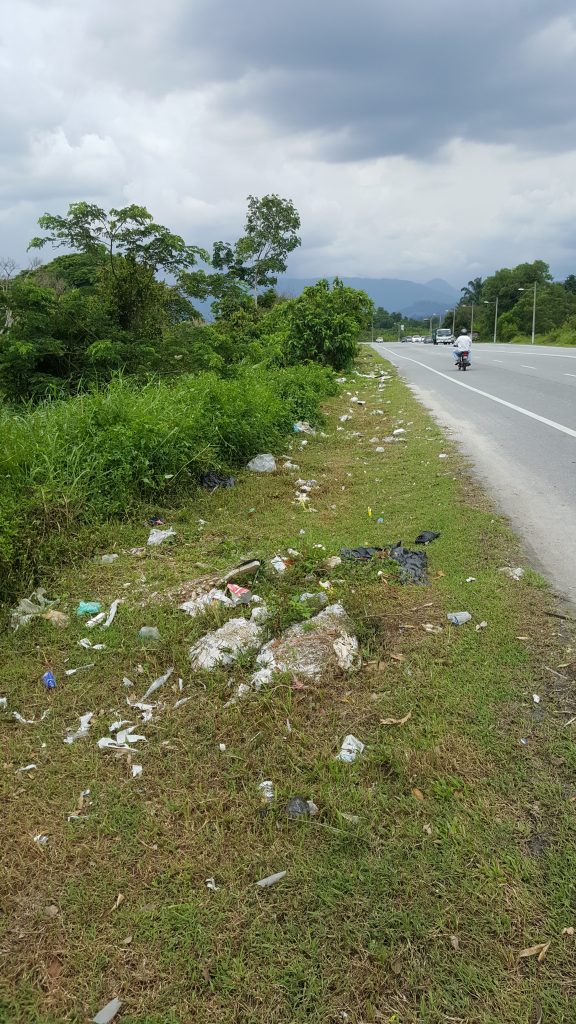 This is especially glaring after the grass verges have been cut to reveal the plastic drinks bags and straws (Ipoh’s new symbol- a plastic drinks bag with straw; proudly immortalised in our wall art for the world to see), bottles, wrappers, plastic bags of pink, yellow, green and blue and drinks cans, plastic bottles. Maybe it is better if the grass is not cut – lalang  looks better than rubbish. 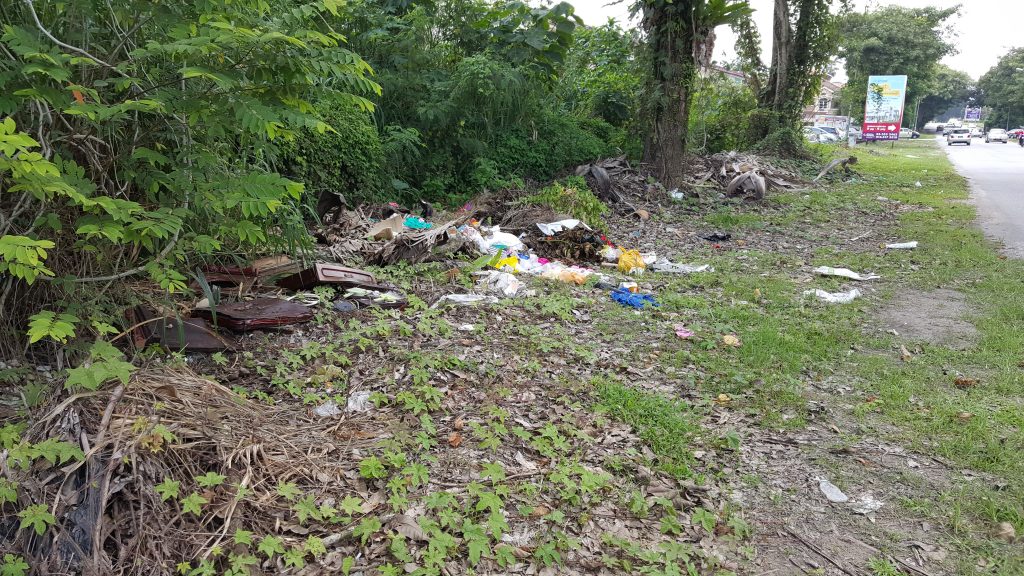 But really, this is not totally true though. The mayor has done an exemplary job if you go to Tiger Lane, Tambun Road, Gopeng Road, Thomson Road, Thomson Lane, Golf Club Road, Caldwell Road – in other words the places where the rich and titled live. The roads are pristine, the grass verges manicured and no potholes. So really, Zamri has fulfilled his pledge – to make Ipoh clean – for these lucky few. 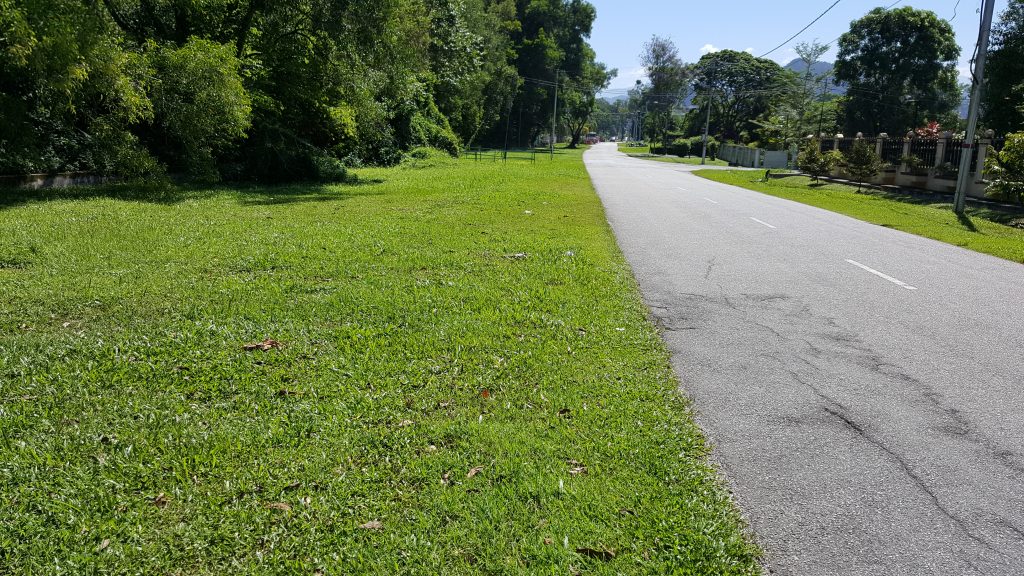 But why only such privileged roads? Surely the poorer areas deserve some attention – if not more attention, because there are more of us? Collectively they pay more rates and assessments than the rich Ipohites but they get proportionately poorer services. Maybe the answer is because the sultan does not drive to, or through these poor suburbs and as long as he sees clean roads the mayor is okay. 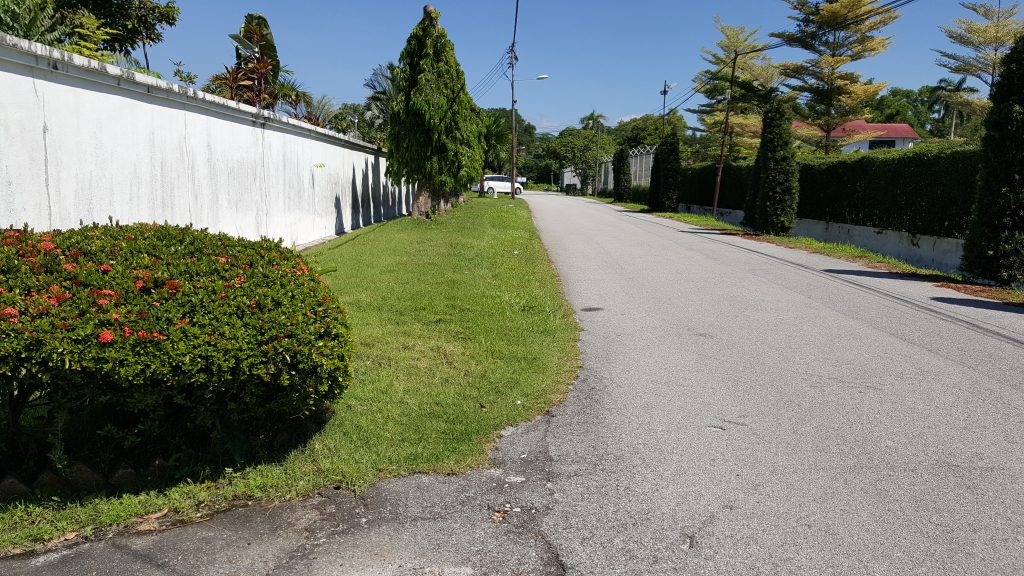 But it’s not all the fault of MBI if you like. Unfortunately in the poorer areas residents appear to be less civic minded. They think nothing of throwing rubbish everywhere.

Only last week I saw two guys on a motorbike. The pillon-rider had a huge sack. As they went over the bridge, the pillion-rider just tossed the sack into the river.  Gawd, no wonder our rivers are sewers! And passengers (both adults and children) tossing rubbish out of their vehicles is a common practice.

Surely parents should know better and set an example to their children.

I don’t know if it’s education, upbringing, lack of civic conscience or what. Unfortunately it always seems to be the poorer suburbs which are the dirtiest.

But that’s not to say the MBI should neglect them. It is time to take drastic measures. If education and persuasion does not work – and they don’t, the government has been “persuading and educating” for decades. Maybe a dose of LKY Medicine will help. If people do not respond to persuasion and education maybe they will respond to hefty fines!

I received a WhatsApp informing me that from June 1st Aeon will not be providing plastic carrier bags. Shoppers are advised to bring their own reusable carrier bags. Apparently the MBI has prohibited its use from June 1st.  This is indeed very good news. But what is unclear is: Does this ban on plastic carrier bags include 1. Styrofoam food containers – they are bad! 2. Does it include drinks-bags-straws which seem to be an Ipoh thing.

If you look at the photos, you won’t see many plastic carrier bags like those provided by supermarkets. Most people use them to wrap up their household rubbish and dispose of them in the bins. Most of the rubbish are plastic drinks bags/straws, small plastic carriers for takeaway food, Styrofoam and drinks bottles and cans. If the ban order does not include these the streets will not be any cleaner than now. And if MBI does not implement the rules on dumping (furniture, mattresses, construction waste etc) people are going to continue to do so. Having rules which you don’t, or can’t enforce is worse than not having them, because people will not take the MBI seriously. Along one road in Bercham, MBI seems to have enlisted the help of the gods (see picture below) but to no avail. 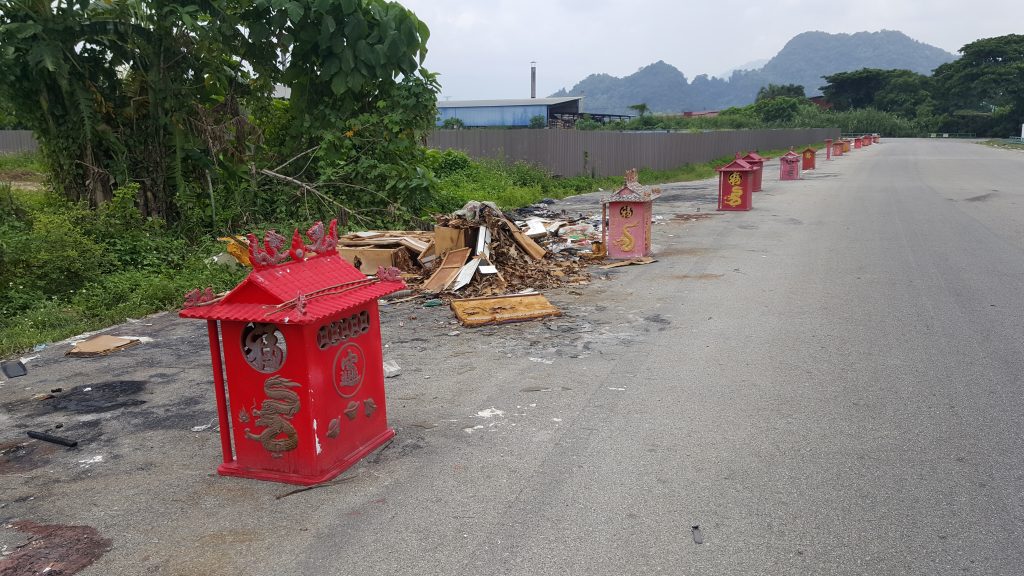 But coming back to Zamri’s proud declaration – on his appointment – the bottom line is he has failed miserably on Cleanliness. Ipoh has become dirtier since he took office.

Not so long ago Penang was slated as being a dirty town. Today people laud it. Penangites are proud of their city. It shows what good government can do . . . and their mayor and chief minister need not sweep the streets like ours did. They don’t need the photo-opportunity, their work speaks for itself.

Over the years Ipoh has become less green – trees have been felled in the night around Ipoh Padang. Trees elsewhere have been felled for road expansion (compare this to Penang where they try to save the tree by building around it).

All this is not the doing of Zamri but then what has he done to green Ipoh?

Progressive? I would be glad for the mayor to point out the progressive steps  he has taken to make Ipoh more prosperous, more vibrant and attractive.

Our young are leaving in droves because they can’t find work in Ipoh. How has Ipoh progressed on this score?

When the mayor and councilors are appointed they feel they owe their positions to their party bosses and the man from KK. They are not answerable to the people. Such a system is unhealthy, undemocratic and unrepresentative. And it does not work.

THANK YOU to everyone who sent photos.