A dangerous precedent is set, when local Councils sue the public 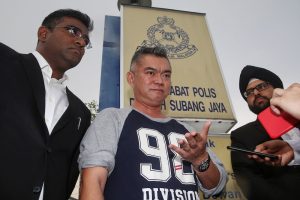 Koh Tat Meng’s attempt to help a dog in distress, has now ended with an unconscionable and pathetic response from the Subang Jaya Municipal Council (MPSJ).

The council is now suing Koh for defamation over the incident, which occurred in October 2019.

MPSJ is foolish to allow this dangerous precedent to be set, as it is an enormous waste of the rakyat’s money and a waste of time.

In these straitened economic times, the council should make better use of their resources.

The money spent on lawyers, and researchers to prepare for this case, could be better spent on improving services to the community and education for the workers, about animal rights and cruelty to animals.

Can’t common sense prevail? Will the MP for this area not sit the councillors and Koh together, to engage with one another and have a mature dialogue so that they can come to an amicable compromise?

Why did the councillors allow this incident to escalate out of control?

The council will be seen as Little Napoleons exercising their arrogance behind a badge. Maybe they want to deter members of the public from complaining about them.

If members of the rakyat are sued by the local council, they will be less inclined to complain about shoddy services, rude behaviour, arrogance and allegations of corruption. Is this legal suit, an attempt to silence the public?

We know from the current high profile corruption trials, in the High Court, that these sorts of threats of litigation,  or firing, are ways of silencing civil servants and members of the public and deterring them from reporting any wrongdoing.

So is Koh a victim of his own compassion? Is MPSJ making an example of him, to deter the public from interfering in its affairs and from reporting any indiscretions? 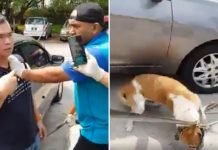 One’s normal instincts when seeing an animal being hounded and in distress, is to help it.

One man’s offer of help is another’s idea of intrusion – a busy body. One man’s attempt to plead for mercy is seen as a sign of weakness, by another.

When print shop owner, Koh and his wife saw a dog being chased, noosed and thrown into the back of a pick-up truck, by a group of dog catchers from the MPSJ, they were alarmed.

Koh tried to persuade the workers  to exercise some restraint and be less violent. The workers said he was obstructing them in their duties.

The dog catchers ignored him, so Koh put himself between the animal and the workers, whilst pleading with them. He said that in Islam, the prophet would have wanted humans to act with compassion.

A few of the workers took umbrage and claimed that he insulted Islam. One worker pinned Koh against a car and shouted expletives at him.

Is that how the council workers treat the members of the public, who pay their wages? Was this worker reprimanded and punished for being rude in public?

The video of Koh trying to plead with the workers went viral and created an outpouring of anger from the public. It also prompted an apology from the Selangor Local Government, Public Transportation and New Village Development, State Executive Councillor, Ng Sze Han, for the workers’ arrogance and crudity.

The Tuanku Permaisuri of Selangor, who is the Royal Patron of the Stay Free Selangor (SFS)  campaign, had also criticised the council workers for their inhumane treatment of the dog.

So, how did the council react? MPSJ retaliated by charging Koh under Section 186 of the Penal Code with obstructing a public servant in the discharge of his public function. If charged, he could be jailed for up to two years, or be fined RM10,000, or both.

In response, Koh pleaded not guilty, and filed a civil suit against the council.

Instead of suing for defamation, MPSJ should engage with Koh, rather than exposing its arrogance and superiority.

DO THE RIGHT THING. Punish the perpetrators of Cruelty Not the people trying to stop it