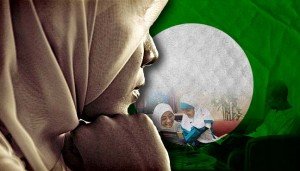 PAS forgets that in a marriage, two people are involved. So when a marriage breaks down, don’t simply tell the woman how to be a perfect wife and mother.

Tell the men, to work harder at saving their marriages.

PAS leaders have forgotten the hundreds and thousands of philandering men who tire of their first wives and marry again, sometimes to women who are younger than their daughters.

The PAS statement released on International Womenâ€™s Day was a deliberate insult to Malaysian women.

Dr Mohd Khairuddin Aman Razali, the information chief for the partyâ€™s Ulama Council, basically implied that a womenâ€™s place is at home, making babies and taking care of the house.

Under PAS, parents need not educate their daughters. Just marry them off at nine years old or make them work as cheap maids.

Convinced that the family institution was breaking down because divorce rates were rising, Khairuddin said, â€œIt is appropriate that the institution of the family be restored, including providing room and conducive space for each couple, especially wives, so that they may perform their true function at home as wives and mothers.â€

As always, the onus is on the woman to save a marriage. PAS might as well have blamed women for the breakdown of marriages.

In Kelantan, men make frequent trips to the flesh pots of Thailand.

So, is a wife wrong to divorce such a husband if he continues to stray? Or is the ulama council advising her to suffer in silence? What if the wife contracts a sexually transmitted disease from her husband? What if much needed family finances are spent on his pleasures?

Currently, men suffer little from divorce. If anecdotal evidence is to be believed, former husbands rarely pay up despite the various syariah laws requiring payments of alimony and child maintenance.

Ex-wives face a constant battle in trying to make their former husbands appear in court. Few women have the resources to continue the legal battle.

Many gave up work when they started a family. It does not matter whether you are rich or poor, as Shahnaz Majid, former wife of Bekir Taib, has found.

Child victim to marry her rapist

Incidentally, last December, Khairuddin suggested said that in statutory rape cases, the child should be married off to her rapist.

What sort of men lead PAS?

The lot of women willÂ regress under PAS.