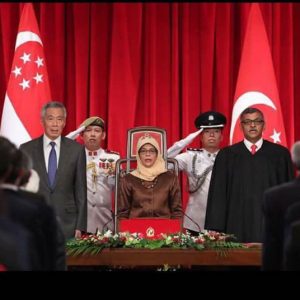 The greatest fear of the Singapore government is a Malaysia that is better governed and less corrupt. The extraordinary events in Malaysia over the past few years, plus the courageous stand of her citizens in GE-14, has been closely monitored from across the causeway.

If the infection spreads, the pent up feelings of Singaporeans may be unleashed. The two nations have a shared history.

Singaporeans look up to Malaysia

Singapore may be a first world nation, but when it comes to an outpouring of feelings, the Singaporeans still look up to their cousins in Malaysia.

Dictatorship could be described as the new democracy in our neck of the woods; the former disgraced PM, Umno Baru’s Najib Abdul Razak, together with the Singaporean premier, Lee Hsien Loong, have been rattled by the ‘Mahathir effect’ in GE-14.

Not since independence has Malaysia been rocked by a political force which has captured the rakyat’s sense of frustration at the nation’s archaic order.

The older generation are weary of the wanton waste of resources, the lack of discipline shown by its leaders and the disintegration of society. The young yearn for a new order where their contributions are acknowledged, where everyone is treated as equals and where they are rewarded for hard work, rather than their connections.

Anwar could not accomplish what Mahathir has achieved on 9 May, when he articulated the needs of the nation, and galvanised the rakyat into action.

In early May 2013,  some Malaysians residing in Singapore were cautioned by the Singapore police for reminding Malaysians to return home to vote.

A few days later, some were arrested in Merlion Park for protesting about the fraud perpetrated during GE-13. The Singaporean government does not like its citizens to have a mind of their own.

At the time, Najib wanted Malaysia to be “the best democracy in the world”, but the hallmarks of his version of democracy were cheating, intimidation and bribery. In Singapore, the authorities also intimidate and take legal action against anyone who dares besmirch the characters of its leaders.

In Malaysia, insecure Malays reject the DAP because of the implied threat that Malaysia will be swallowed up by Singapore. Their fears are enhanced by some Chinese Malaysians, who look up to an idealised version of Singapore. Singapore absorbed many of them into learning institutions, gave them scholarships and jobs. These Malaysians forget that the price paid for Singapore’s transformation into a first world nation has been high.

What use are towers that reach up to the sky when deep down, its inhabitants lack a soul?  Children suffer from mental health issues because of academic pressures. Adults complain of a poor work-life balance. Many Singaporeans are unhappy and a number of them have migrated.

When Anwar held a talk at the London School of Economics in 2010, the event was oversubscribed and several hundred participants were accommodated in an adjoining lecture theatre to listen to him via video link.

The audience were mainly young adults in their early twenties, but the most amazing thing, was that a sizeable proportion were Singaporeans.

Many people disagreed with me, when in an article, I mentioned the possibility that Singapore feared a strong, successful and less corrupt Malaysia, and that the People’s Action Party (PAP) would prefer Umno-Baru to govern Malaysia, rather than the Opposition coalition.

Without a doubt, Singapore is clean, its public transport is efficient, the entertainment and the promotion of the arts is good, English is widely spoken, it is safe, local and international cuisines are easily available, and the island state is an international transport hub.

In many ways, Singapore is like Malaysia. Both have state-controlled media, its armed forces are dominated by one race, and they are ruled by autocratic governments. The cost of living is high, housing and car ownership are expensive.

Both Malaysia’s Umno Baru government and the Singapore PAP have alienated themselves from the population.

Although change is within the grasp of the ordinary Malaysian, change in the near future is only a dream for many Singaporeans. Wasn’t it Lee Kuan Yew ( left ) who once said, “…I spent a whole lifetime building this, and as long as I am in charge, nobody is going to knock it down.”

Like Dr Mahathir Mohamad, will Lee ever relinquish his hold on the island?

In April 2013, the  Global Witness exposé highlighted the flip-side of the financial world of Singapore. It appears that dodgy South-East Asian governments and drug barons find Singapore a convenient place to launder money.

To add to Singapore’s woes, there are the worldwide syndicated football rigging and sex scandals which have rocked the world.

Only the naive would think that corruption does not exist in Singapore – they are simply better at concealing their underhanded practices. An acquaintance who handled the Malaysian side of business for a Singapore firm, alleged that he was given a sizeable allocation to sweeten any business deals in Malaysia.

The Singaporeans like to project a clean image, but it is the Malaysians who gets the bad  reputation.

The government of Singapore is concerned by the moral awakening in their people, but they fear most the economic repercussions if Umno-Baru were to be replaced.

If the Pakatan Harapan (PH) administration gave Malaysians meritocracy, and excellent learning institutions were open to all, the majority of Malaysians would not need to go to Singapore to study.

There are tales of children being woken up at 4am to travel to Singapore to go to school because their parents could not enrol them in a local Malaysian school. Bright children are deprived of scholarships because they belong to the wrong race or religion. Families are broken up when some family members moved to Singapore for employment.

Singapore has every right to be scared if Umno-Baru were oustde; this happened on 10 May.

The brain drain would stop. If working conditions in Malaysia were improved, the daily migration of workers to Singapore would be stemmed and Singapore might suffer a shortage of workers. If corruption was reduced, Malaysia would attract more foreign investment.

The feeling of xenophobia is high in Singapore, and is mostly directed at the Chinese from the People’s Republic of China (PRC). Singaporeans consider them to be loud, brash, arrogant and lacking in culture. They are wary of their government’s desire to attract more people from the PRC to increase the dwindling population, to take care of the elderly and to bolster the economy.

The recent wave of xenophobia in Malaysia was generated by Umno-Baru because it gave away identity cards (ICs) to foreigners – like the Filipinos and Indonesians – in exchange for votes to stay in power.

Leaders in Umno-Baru have lost valuable Malaysian land to the Singaporeans, such as the Pedra Banca island off Johor and the land swap deal involving Keretapi Tanah Melayu (KTM) land in Singapore.

To increase their land mass, Singaporeans have obtained sand from Malaysia, through legal and illegal means. The buying power of the Singapore currency means that they can buy property cheaply in Malaysia and in some places, have priced the locals out of the housing market.

In Ipoh, Singaporeans have built skyscrapers beside limestone hills and many locals fear that this has set a precedent and before long, the natural beauty of Ipoh will be marred forever. The previous Perak Umno-Baru administration seemed oblivious to the concerns of the locals.

A clean and efficient government can improve our economy, but Umno-Baru will continue to hamper our progress.

Without cronyism and corruption, Malaysia will emerge a stronger, richer nation, no longer the poor relation of Singapore.