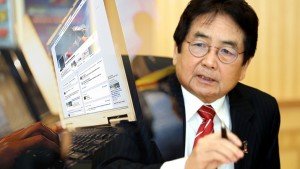 But, he conveniently kept quiet about Umno-Baru’s army of cyber-troopers. They attack journalists and the alternative media. They will be active during the Sarawak state elections and in GE-14.

In early February, Minister in the Prime Minister’s Department Joseph KurupÂ said that our widespread abuse of social media would threaten national unity.

Kurup would have gained more support from the rakyat, if he had warned about the terrorists’ abuse of social media, harming national security. Daesh use social media to influence, recruit, collect donations, and order volunteers to kill innocent people.

Instead, Kurup warned us not to destroy the existing harmony by twisting the news. He said, “… Sometimes we see the statements of our leaders are also distorted.

Who is funding the cyber-troopers?

First. Kurup should ask Najib, what he fears. Our questions about the government’s incompetence, injustice and corruption remain unanswered. Instead, politicians and top civil servants fob us off with more untruths, and lies.

Second. Kurup claimed that “the statements of our leaders are distorted.” Isn’t it ironic that government officials are the ones responsible for distorting their own statements?

A RM2.6 billion ‘donation’ morphed into a ‘deal’. Putrajaya initially denied that the money existed, until the foreign press, printed the facts and refused to retract their allegations. Putrajaya claimed that a Saudi Prince had donated the RM2.6 billion, but the Saudis denied this.

Third. How about this for the disruption of national unity? Human rights NGOs, journalists, and Opposition politicians have their emails, websites and twitter accounts bombarded by paid Umno-Baru cybertroopers.

Fourth. Umno-Baru’s Ahmad Maslan has admitted to the formation of an army of Umno-Baru/BN cyber-troopers, to “enhance” and “improve” the image of the government. This is a desperate attempt at covering-up more scandals and also to intimidate the rakyat.

Najib blamed social media for Umno-Baru/BN’s losses in GE13 and Kurup has been directed to curb our use of the Internet.

Instead of targeting the rakyat, Kurup should warn the government to stop abusing social media and tell us who is funding Umno-Baru’s cyber-troopers. .