Yin urges our religious leaders to sow seeds of harmony and interfaith acceptance instead of sowing seeds of discord. 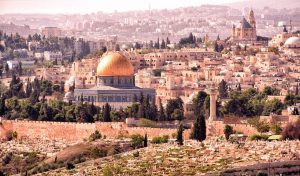 Yin: Race and Religion are the two main stumbling blocks to our nation’s unity; peace and prosperity.

If we allow it to fester; if we allow the racial chauvinists and religious zealots to go unchallenged we lose by default. All of us – Malaysians.

Apparently the Indonesian Government has declared that non-Muslims cannot be called kaffirs. And that ‘people of the book’ (Christians and Jews) are brothers and sisters.  In Indonesia it is not forbidden for Muslims and Christians to marry without converting.

On the 100th Birthday Breakfast Lecture for the Chief Imam of Ghana, Sheik Osman Nuhu Sharubutu, the Vice President, Dr Mahamudu Bawumia, a Sunni Muslim, brought up a few points worth sharing with Muslims in this country: (YouTube; graphic.com.gh)

“At a time when the world is experiencing religious intolerance; leading to killings by religious extremists who could not tolerate the religious views of others Ghana is basking in great collaboration between the Christian and Muslim communities to the envy of the world”

Sheik Osman, the chief imam, has been the champion behind the Ghana’s position as an oasis of interfaith co-existence and harmony. 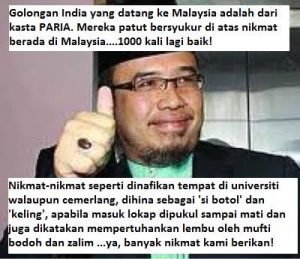 Back home the Chief Mufti of Perlis, Dr Mohd Asri Zainul Abidin, has allegedly accused the non–Muslims of bullying the Muslims. How? He did not say. Is this a man of God? What is his agenda? Instead of sowing seeds of harmony and interfaith acceptance he is sowing seeds of discord.

Asri is not the only culprit in disseminating discord and suspicion among the Muslims. In 2006, the Chief Mufti of Perak, Harussani Zakaria, allegedly circulated an SMS claiming that Muslims were being converted at the Lady of Lourdes Church, Silibin, Ipoh.

This resulted in Muslim NGOs protesting at the church. Harussani blamed it on a woman who supplied him with what was purportedly evidence of the mass conversion that was to take place but which turned out to be untrue.

Whatever the truth of the matter, these are examples of irresponsibility by heads of Islam in their respective states.

What is the real intent of such allegations? 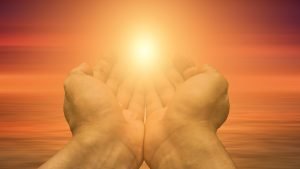 But our problem goes deeper than that. It is not about religion per se but about power and self interests. A seeker of the truth would have allowed Muslims to seek their own paths (even if it is within Islam) instead of the narrow official doctrine dictated by the state and their religious establishment cohorts.

Going back to Dr Mahamudu’s speech (24/4/19) at the 100th Breakfast Lecture in Accra; he pointed out the following:

How many Malays know that? 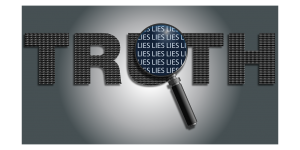 The truth of the matter

I am not a theologian and I know little about Christianity and even less about Islam. I am merely quoting what Dr Mahamudu said.

But my point is this: Whatever the truth of the matter or whatever the interpretation of the Koran a Muslim chooses to follow, let him. Let him find out his own truth.

Instead, we have a group of people who think they know what God wants and what He said and they impose their views on other Muslims. Looks like they have cornered the market on true Islam and every other Muslim is a deviant.

Reminds one of the Reformation and the way the Catholic Church tried to stop other interpretations of the Bible to the point of torturing and killing those who dared hold other views. The reformists posed a religious and political challenge to the Roman Catholic Church and had to be silenced.

That was in the 16th Century. We are in the 21st Century! 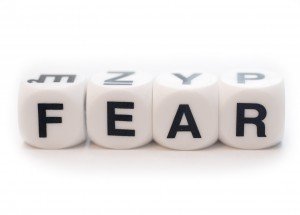 What are they afraid of?

What are our religious establishment and their politician bedfellows afraid of? That their influence in the corridors of power will wane once Muslims see the light (or a different light)? That they will lose their fat salaries and perks? That the politicians will no longer court them since they cannot deliver votes anymore? Do dissenting views pose a religious and political challenge to their hold on power? Will we have our own Spanish Inquisition?

What the religious establishment is doing is dangerous in that they are cultivating a climate of suspicion and hatred among Malaysians. When Asri says Muslims are being bullied (without substantiating it) what is his intention?

Only those who are insecure in their belief will prevent open debate and discussions. To allow freedom of religion in the true sense.

Asri talk of Muslims being bullied? Non Muslims are discriminated against in more ways than he cares to know.

Different criteria for erecting churches and temples to the more generous rules that apply to mosques and suraus. Government funding for other faiths is  vastly disproportionate to their numbers compared to Islam.

Non Muslims are not allowed to utter words like Allah despite other Muslim scholars saying that the Koran does not forbid it.  And I have only mentioned three bullyings.

Muslims being bullied Asri? Walk a mile in my shoes and you will know what bullying is. 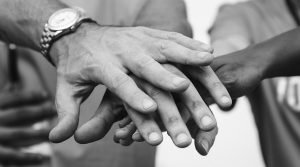 Religious leaders (and politicians) should be finding common ground to bring all Malaysians together. Not seek to divide and rule.

An Egyptian friend gave me an Arabic calligraphy which says “The truth shall set you free” (rough translation). I am happy to give it to Asri to hang in his office.

I hang a Muslim prayer bead (given by a Syrian I met on the MRT) on my study lamp.

I respect Islam as I do all religions even though I am a Christian.

The way the religious establishment is behaving in this country; they are driving people away from Islam – including those of the faith.

They are dividing the country and causing trouble.

There was a time when Islam was more tolerant and the Malays were left to get on with their lives without the ulamas breathing down their necks. In those days they mixed freely with the other races, ate with them and mosques and churches and temples were built near to each other. Today you cannot show a cross as it offends the Muslims. And even non-Muslim women cannot show any skin (never mind Muslim girls) especially in government offices (the sari and sleeveless blouses are a no-no).

Islam in Malaysia has regressed!

In the wake of Christchurch and Colombo we do not need irresponsible Muftis stirring up trouble.

We need a more progressive; open and tolerant Islam not one that is going backwards.

Want to come to my Christmas party Asri? Bring your pal Harussani.