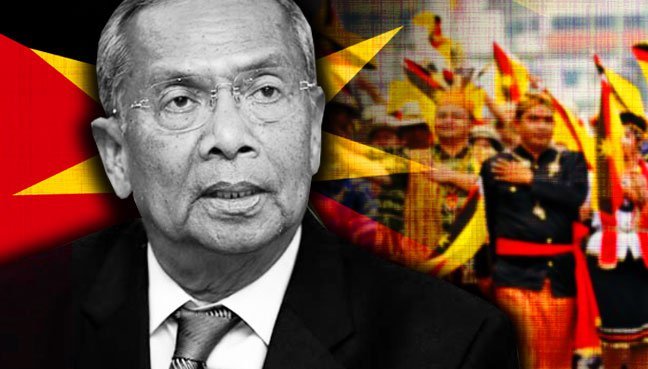 The hugely popular and charismatic CM of Sarawak, Adenan Satem, will be sorely missed. The question now is, “Will the decision to pick the new Sarawak CM, rest with the Sarawak people, or the current Governor, Taib Mahmud?

However, lingering questions about his rule remain. Why did he feel the need to ban West Malaysians from entering Sarawak. Is he afraid that they will reach-out and engage with the Sarawakians?

It is the most racially harmonious nation, within Malaysia. The many indigenous populations exist in peaceful co-existence. Families have members belonging to different faiths.

Where in Malaysia can a stall, selling bak-kut-teh, nestle beside a Malay stall selling halal food, without anyone batting an eyelid?

Where in Malaysia, can an open house be a true open house, where no special cutlery or crockery has to be bought specially for Muslim guests, where people have no qualms about visiting a longhouse, or a house, which celebrates Gawai or Christmas?

Malaysians are aware that BN’s policies, from peninsular Malaysia, don’t have much to offer, except the divisive race and religious based politics. Sarawak is the only nation within the Malaysian tripartition, which practices “1Malaysia” on a daily basis.

It is time for a change

Sarawak can show the rest of Malaysia that it can elect the best man for the job, be he Muslim or non-Muslim.

Sarawakians have seen how Muslim leaders in Putrajaya have robbed and plundered the nation, and divided the rakyat.

Sarawakians have also suffered under Taib Mahmud, the former CM. Why should Sarawakians place their trust in Muslim leaders?

Malaysia is a secular country, and in a Christian majority nation like Sarawak, perhaps, the time is right for the people to have a capable non-Muslim CM.