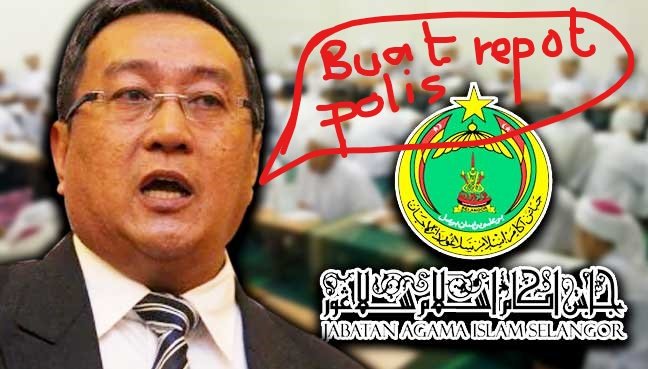 If JAIS, JAKIM and the Minister of Education cannot take action against rogue teachers and dodgy tahfiz schools, why are we funding them?  Sack the lot!

Taxpayers money is being used to operate and pay for these massive organisations, which when things go wrong, all hold their hands up and say, “We cannot do anything. Make police report lah.”

The police report does nothing about improving the overall condition of our schools.

JAIS, JAWI and the other state religious Jabatans use OUR money to raid people’s homes, hotel rooms, private functions,  in other words they poke their noses in when they are NOT wanted, but when it comes to taking action against teachers who beat-up our children, all deny responsibility.

If they have no power, who has?

Today’s news in FMT says it all. The director of The Selangor Islamic Religious Department (JAIS), Haris Kasim, said that JAIS has NO power to act on teachers who abuse their pupils in tahfiz schools.

Haris said, “We have limited powers. They (religious schools) are in the private sector while we are in the government.”
A cop-out if you ask me!
What is the point of JAIS, JAWI, JAIP and the other state religious authorities if when things go wrong, their directors hold their hands up and say,  “Don’t look at us. We got no power at all.”
The Minister of Education* is just as irresponsible. He has already said, that these tahfiz schools are not under him, but they will SOON be, under JAKIM.
The operative word is “Soon”.
Soon is not good enough. Since the time Mohd Thaqif died, there have been other reports of beatings. The news has not deterred the sadistic teachers from whipping their students.
So who is responsible if a boy has his ribs broken or dies from a ruptured spleen?
From the reaction of the JAIS director, NO one is  responsible. The tahfiz school is free to do what it pleases, when it pleases, and how it pleases.

Is it God’s will that stops Muslim parents from taking action?

Haris said that JAIS had powers to act, only if the teacher had been apointed by JAIS, such as the Al-Quran and Fardu Ain (Kafa) schools, because these were under their authority, unlike the other schools which are private.

Ever since Thaqif died from an alleged beating at his religious school, we have heard many horror stories about more beatings in tahfiz schools.

I am more disgusted by the silence of the parents and of the Muslim community, who simply shake their heads and say “Takdir Tuhan”

If you don’t want to be a responsible parent, stop having children.

When will you assume your parental duties, and DEMAND that the MINISTER of EDUCATION do something?

Malay/Muslim parents must do something before another child dies.

(Note: *He is the Minister who is second from the top, of my list of Ministers who must resign.)