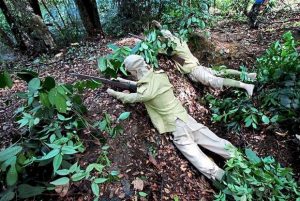 Attention all history buffs, geopolitical aficionados and military enthusiasts! Members from the Serene Kinta River facebook page, are arranging a trip to the Green Ridge Trench in Kampar, the site of a crucial battle, during the Second World War, in British Malaya (Details below).

If the Imperial Japanese Army (IJA) had won the Battle of Kampar 76 years ago, picturesque Kampar town, flanked by its mist laden hills, would have been presented to Emperor Hirohito, as a New Year’s gift.

Fortunately for us, the IJA was stopped in its tracks by a combination of British and Indian troops from the 11th Indian Infantry Division

Many other facts, escape us.

Very few Malaysians realise the significance of the Sikhs, many of whom died in the Second World War, trying to defend the then Malaya.

Even worse, is that fewer Malaysians know that Kampar, is not just famous for its tin, but was also a strategic town, located at the southern end of the tin-mining Kinta district. Such was its importance, that 76 years ago, the Battle of Kampar was fought on the hill-slopes, surrounding it.

Today, as we wander the streets in Kampar’s old town, the quaint pre-war shophouses  that many Malaysians abhor, have stood the test of time and survived important timelines, in the history of Malaya/Malaysia. Kampar and the surrounding areas have been ravaged by many battles.

Please remember that we are a peaceful and independent nation now, because men once fought, to defend our sovereignty. 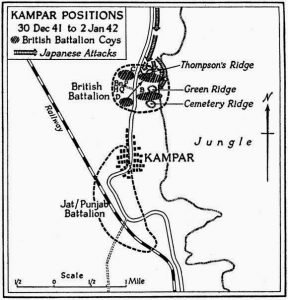 For 4 days, from 30 December 1941 to 2 January 1942, at the beginning of WWII, troops from The Royal Leicestershire Regiment, The East Surrey Regiment, and The 11th Indian Infantry Division were detailed to delay the onslaught of the 5th Division of The Imperial Japanese Army at Kampar, Perak.

The aim was to allow ample time for the 9th Indian Infantry to withdraw from the East Coast, and to prevent the capture of the Royal Air Force Base in Kuala Lumpur by the enemy.

To establish a strong defence, 3 trenches, called Green, Thompson and Cemetery  Ridges, were dug on the slopes of Gunong Bujang Melaka, Kampar. The Green Ridge was of particular importance as it overlooked the Kuala Dipang bridge across the Kampar River, a vital link on the North-South Trunk Route of British Malaya.

The British retreated after they successfully delayed the Japanese invasion, and then regrouped in Slim River, to prepare for the next  major battle. The landing of a group of Japanese combatants in Telok Anson had rendered the position in Kampar untenable.

If you are interested in what happened next, why it happened, when it happened and also the consequences of winning this crucial bit of the WWII, please do join this Sunday’s walk to the Green Ridge Trench, in Kampar. 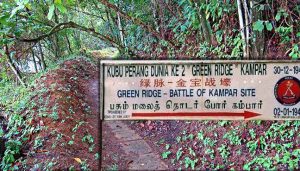 Tour will be led by a historian

In conjunction with the 76th anniversary of the Battle of Kampar, The Serene Kinta River facebook page is proud that its tour, will be led by the renowned WW2 historian Mr. Harchand Singh.

Visits to former battle grounds are rare, because such sites are often hidden and are off the beaten  track.

The organisers said that the trip will only be confirmed if they have at least 10 participants.

If you are a history buff, geopolitical aficionado or a military enthusiast, or if you know of one, from Malaysia or from  overseas, please tell them about this mini expedition.

NB: Own transport. For those from outstations/overseas, accommodation for the previous night and/or the night can be arranged.

Please also read the tips for making the day enjoyable for you. Check out the Serene Kinta River Facebook page.

(Mr Harchand Singh has expressed sadness that the trenches are poorly maintained and are gradually disappearing. I think the appropriate Jabatan needs to address this urgently.)