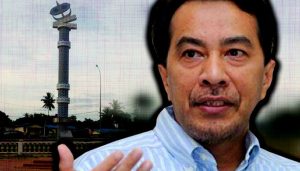 Do you think Kelantan needs a monument to remember the flood victims of 2014?

If the above photo is to be believed, the “flood” monument looks like a tiled telecommunications tower topped by a wau (kite).

Last August, the monument based on Islamic themes, such as being erected to face the qibla, the direction for Muslim prayer towards Mecca, was erected in Kuala Krai. This district was one the worst places to be affected. Most of the people there are from the agricultural sector.

Former exco, Husam Musa (above), alleged that funds from a government trust, Yayasan Amanah Tok Kenali (YATK) had been used to pay for the monument.

This allegation was denied by Wan Roslan Wan Hamat, the political secretary to the Menteri Besar Ahmad Yakob.

RM300,000 may be chicken feed in comparison with grandiose Umno-Baru projects, but to the poorest state in peninsular Malaysia, RM300,000 is a king’s ransom.

RM300,000 could have been used for rebuilding the homes of some of the victims, who are allegedly still in temporary housing.

RM300,000 could have been used to help in the education of the children, whose parents died in the flood.

RM300,000 could have been used for improving flood rescue centres, perhaps in training people about water-borne diseases, in buying inflatable boats for rescue, for stocking up on provisions like canned food and bottled water, or for buying emergency generators for hospitals.

The Kuala Krai district council secretary, Shuhairy Samsudin, said the monument would remind people about the great 2014 flood, and pay tribute to government agencies, NGOs, corporations and individuals who helped rescue the victims.

No! The monument is a symbol of PAS’ arrogance, incompetence and lack of priorities.

Remember when the PAS state government denied that there was illegal logging in the interior, activities which had significantly contributed to the devastating effects of the flood.

Remember how Nik Abduh Nik Abdul Aziz had warned the Kelantan people, that the flood was a punishment/warning from God because of the state’s failure to implement hudud law.

The monument also serves to remind us of Najib Abdul Razak’s tidak-apa attitude and that golf takes priority in his busy schedule when he was more interested in his round of golf in Hawaii, with former President Obama, and didn’t rush home for the flood-stricken people.

The monument is a slap in the face for the flood victims, many of whom are allegedly still in temporary housing. It is a huge waste of funds.

If you are directly affected by the Kelantan flood of 2014, would you like the RM300,000 to be used on a flood monument, or be used to help you get back to normality?