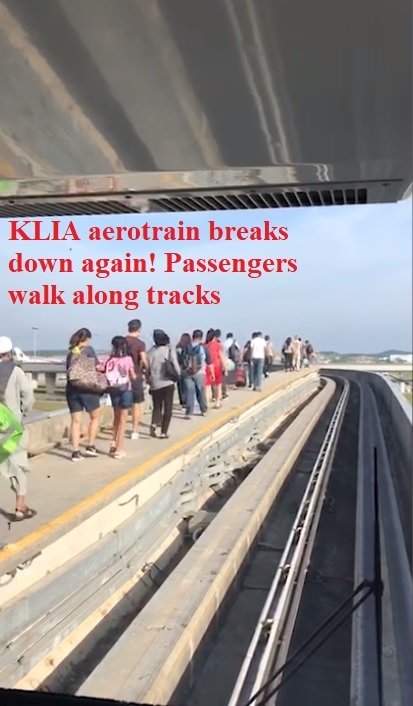 Passengers refused to wait for the engineer, who had been summoned, soon after the problem happened. To his credit, he was onsite, one minute after the incident was reported.

This is the second breakdown in three months.

The  managing director of Malaysia Airports Holdings Berhad (MAHB), Badlisham Ghazali, blamed the malfunction on their aging trains. He said that their two trains have been in use for 20 years and were due for a major overhaul towards the end of the year. He also claimed that the trains were currently undergoing heavy maintenance work.

To stop further incidents, Badlisham said that engineers would be stationed on the trains to ensure there were no more such incidents.

Are there no safety issues concerning people walking on the tracks?

How is it possible for people to gain access and walk along the tracks?

Where were the security guards? If someone wanted to sabotage the running of KLIA, here is one possible  method.

If someone slipped and fell onto the tracks, and hurt himself, who is liable? Are there signs warning people not to walk on the tracks?

Some people flying into KLIA may be on their first visit to Malaysia. Just think of the impression MAHB gives of Malaysia, with stationary trains, irate passengers prising open the doors of the aerotrain, and passengers walking on the tracks.

If this occurrence is known to be happening regularly, buses should be on standby to ensure that passengers have a smooth journey to and from the terminal building. Perhaps, an announcement to this effect should be made.

The Minister of Transport, Liow Tiong Lai, and the Minister of Tourism. Nazri Aziz,  should demand that MAHB improve its overall performance. Are passengers paying airport tax for shoddy service?

The breakdown is not a one-off occurrence. There are only two trains to maintain for the short distance between the two buildings.

Perhaps, the maintenance is not up to scratch. Malaysians are aware that we lack a maintenance culture. We try to fix the problem, when things have broken down, and call this quick-fix measure, “maintenance”.

When employees do not perform, they are punished and retrained, demoted or sacked.

When MAHB does not perform, why only give it the equivalent of a rap on the knuckles?

Why not heavily fine MAHB, and stop the annual bonus of its MD and Chairman?

(NB: Top photo is a screenshot from YouTube NST video above)