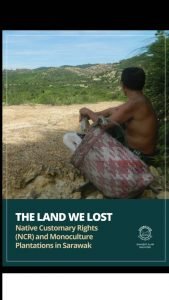 This publication stresses on the importance of understanding the context of large monoculture plantations in Sarawak accurately, as it entails two destructive factors that cannot be denied in any way. First, it involves the destruction of forests, rivers and the environment. This is in fact a post-logging development, which began in the 1990s, as a result of the depletion in natural timber resources caused by the excessive logging conducted between the 1980s and 1990s. Second, it involves the violations of the NCR. Both factors are caused by various systemic weaknesses in governance, policy and law, which have failed to ensure sustainable forestry management and provide land tenure security for the NCR.

This understanding makes no distinction between oil palm, pulp and paper and timber tree plantations. What is of concern here is not the commodity of choice, but rather, the manner and context in which a monoculture plantation is developed. Equally important, such destructive plantations are also typically run by large corporations. They are neither owned nor run by smallholders.

This publication concludes that from the late 1990s onwards, more than 3 million hectares of land in Sarawak, or a quarter of its land area, or an area approximately the size of the state of Pahang, has already been designated for the development of monoculture plantations. Therefore, the statistics on Forest Reserves and Protected Forests in Sarawak today will also include areas that in reality are no longer forests, but instead large plantations of pulp and paper, timber trees and oil palm.

Today, 2.8 million hectares have already been licensed under the Licence for Planted Forest (LPF), which is under the authority of the Sarawak Forests Department. In principle, the LPF is a permit to develop pulp and paper and timber tree plantations. However, 285,520 hectares from 15 LPFs have been allowed to plant oil palm for one cycle of 25 years.

For the oil palm plantation sector, this publication has detected 1.2 million hectares of land, which in all probability, has been designated for it. Nevertheless, according to the Malaysian Palm Oil Board (MPOB), in 2017, Sarawak had actually possessed some 1.5 million hectares of oil palm cultivation areas. Between 2007 and 2017, oil palm cultivation areas in Malaysia increased from 4.34 to 5.81 million hectares. The highest increase had indeed been contributed by Sarawak, at 0.94 million hectares. Outside of the LPF system, permits to develop oil palm plantations are under the authority of the Sarawak Department of Lands and Surveys. While there are projects that are fully developed by private companies, others may involve facilitation from government agencies such as LCDA, SLDB, SALCRA and FELCRA. There are also projects that attempt to involve joint ventures with NCR landowners, especially under the Konsep Baru model. However, this approach has also been widely protested against by communities, because it may cause them to lose the access to and control over their NCR land up to 60 years, or possibly, permanently.

Although the impacts of logging on indigenous communities are also horrendous, this time around, monoculture plantations entail the actual loss of their NCR land. Their forests and smallholdings have been fully destroyed by land clearing activities. Today, many indigenous villages in rural Sarawak have had to source their potable water from rainwater, after their rivers have been polluted. Naturally, such destruction has also resulted in a sharp loss of income. All these continue to be experienced by members of the Residents’ Association of Sungai Buri in Bakong and the Residents’ Associations of Rumah Lachi in Batu Niah, both in Miri Division, which were documented by this publication.

It is unlikely that such deforestation and NCR violation issues can be resolved by any type of certification process. Instead, this publication recommends that policy and legal reforms as the best way forward. Although the federal government has announced that it will halt the expansion of new oil palm cultivation areas, this publication also emphasises that most licences for monoculture plantations had already been issued between the late 1990s and 2005. However, not all of such licensed areas have actually been fully developed. Therefore, the publication urges the federal government to take the necessary actions to protect forests and NCR territories in licensed areas that have yet to be developed, including those involving oil palm cultivation.

The Land We Lost can be accessed at: 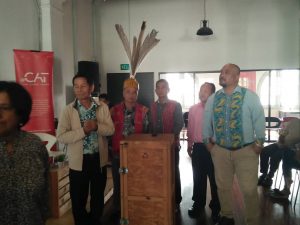