Why can’t governments leave the Orang Asli alone instead of trying to convert them, control their movements, change their way of life and rob them of their lands? By all means help them such as provide them with proper medical care, infrastructure, an education that will not alienate them but will address their communities’ needs.

Many Malaysians believe that the Orang Aslis are being converted for the wrong reasons. Reasons which have little to do with religion, but are about land grabs, manipulation, and greed.

Positions of power in state governments are mostly held by Malays.

When Malaysia signed the United Nations Declaration on the Rights of Indigenous Peoples (UNDRIP), 2007, the people in government probably imagined that this declaration referred to them, meaning the Malays, and NOT the Orang Asli.

Sadly, the Malays in power, simply CANNOT accept the fact that the Orang Asli are the true bumiputera. They believe the UNDRIP has nothing to do with OA rights.

I believe that the MAIN* reason that state governments PUSH to convert the Orang Asli, is to have access to their land.
Think about it…

The OA are the guardians of our forests, where most of our water catchment areas are situated. The forest/jungle is where we find a diverse array of plants, insects, animals, etc. The OA live in harmony with nature. They respect mother nature. They only take what they need…there is no waste.

HOWEVER, the forest/jungle is also a treasure trove.

The hundred year old logs are cut down and sold to overseas buyers for making planks, chopsticks or furniture.
The lesser trees are for the paper and pulp industry.

When you have the OA guarding the area and treating it with respect, and forming blockades to stop cronies and companies from raping the jungles, state governments are furious. 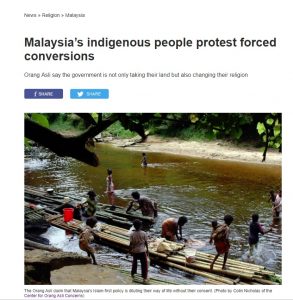 The state and public opinion

What does the state do?
They can’t lock the OA up…this will get everyone angry that the minorities are being trampled on..

So, they send in the preachers….

Naturally, it is not just the Muslims who go in to try and convert them…but the religious departments do the conversion on a large state sponsored scale…

They don’t just convert or “masuk Islam” the OA. The religious preachers probably tell them, that they “masuk Melayu”.

Many people know that to “convert” does not necessarily mean “to become Malay”. However, it is widely alleged that the government has taken the opportunity to abuse the situation. It is all about control.

….Thus, the OA are forbidden to do many things, that define OA cultures. He cannot hunt for wild boar and cannot eat pork. He cannot perform the OA burial rites, because he is now Muslim. Many adopt Malay names. Their children are bullied in schools.

Many OA women and girls now wear the tudung. In some extreme cases, it is alleged that some of them have adopted the niqab. Saudi Arabia’s wahbhism has manipulated the culture of the Malays, and OAs. 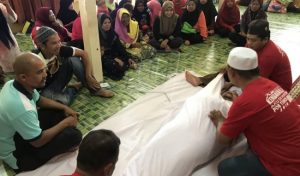 The bottom line is this. The authorities convert the OA for LAND GRABS and the MONEY, from the treasures that they harvest in collusion with companies, mostly cronies.

Many Malays have made a mess of their own culture. They give in to the Saudi Wahabi brainwashing. They don clothing which is more suited to the dusty desert climate and speak in a language which perhaps, some of them think will make them closer to God. It is all about preparation for the afterlife. They do not show compassion for other people who are of a different creed and culture.

I say, leave the OA alone. Let them preserve their adat, practises, beliefs and culture.
They guard our forests. They protect the environment.

Mother earth depends on them…we depend on them… 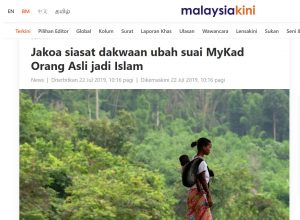 NB: i) *There are five reasons, that I can make out for the state sponsored conversion…..but in the video above,  I discuss the main reason…it is a story of greed, manipulation and abuse of the minorities.)

ii) The other four reasons are shown in another video…

iii) The title of this post could easily be, “The hypocrisy of the state government”, or perhaps, “Janji Melayu” or “Melayu munafik” is a more apt title.