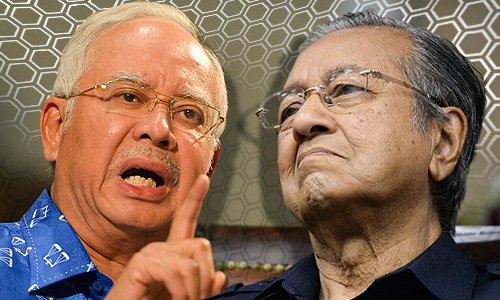 In the thousands of words that have gone back and forth about former PM, Mahathir Mohamad and Pakatan Harapan (PH), there is one clear point of agreement.

We all want to get rid of Najib Razak and BN!

Then came the distraction of Mahathir Mohammed, and this has divided the anti-Najib/BN camp.  Bear this in mind, both sides of the argument do not want Mahathir, except:

I think the above is a fair summation of the situation, is it not?

So instead of debating “till the cows come home” (as reader Eappen K John puts it), let’s look at the facts.

First. To say that Mahathir will tip the scale in favour of PH is speculation. There are no facts to support this.

Second. By the same token to say that he will not, is also speculation.

But judging by the responses it would seem that opinions are evenly split. So let’s say Mahathir will lose as many voters as he will gain for PH.

Third. But what we see is that Mahathir is a big distraction, a divisive figure who has driven a wedge between two groups in the anti-Najib lobby.

I am not saying that we should not involve Mahathir, BUT I am saying we must not let him be PM.

Fourth. The facts we have before us is Mahathir’s track record during his 22 years in office. There is no need to list his wrong doings – everyone knows them.

This man has a proven bad track record. Even now he criticizes Najib for using OSA, while he was the one who legislated it and used it.

Today he says Najib is bluffing the Malays by telling them they will lose everything if UMNO loses. Did Mahathir not do the same?

The famous line “the Malays will disappear from the face of the earth . . . if not for UMNO”? This is the same man the bleeding hearts want as PM on the speculation that an old man about to meet his creator wants to make amends. The “NO Mahathir” group is arguing on facts – his track record and not on speculation.

Fifth. We don’t know what PPBM stands for other than that it wants to get rid of Najib. That is not enough to govern on. We have an idea of what PKR, Amanah and DAP stand for, but not PPBM. We know Mat Sabu’s record, we know Lim Kit Siang’s and Anwar Ibrahim’s and they are acceptable; but not Mahathir’s, that is why we don’t want his hands on the tiller again.

Sixth. We know that PKR and DAP have capable young leaders (Rafizi Ramli, Nurul Izzah Anwar, Tony Pua, Ong Kian Ming etc) in the wings. Who has PPBM got? Mukhriz Mahathir? Spare me.

But since some people like speculations; here’s one – A possible scenario:

Najib is kicked out of UMNO Baru and he disappears into the sunset. Overtures are then made to Mahathir/PPBM to get back into UMNO for the sake of Malay unity (the race card that is Mahathir’s stock in trade). I guarantee Mahathir will move back – he has gone back before.

DPM, Zahid Hamidi, and others will have no qualms getting rid of Najib if they think it will save themselves – politics is a ruthless game and loyalty is a rare commodity. Already moves have been made to push Hishamuddin Hussein ahead of Zahid. So the DPM knows he is not safe. He may decide to do the dirty on Najib, before Najib does it to him.

It’s time we remove the distraction of whether Mahathir will be PM. PH owes it to the voters to come clean on this. To remain opaque on this will only hurt the coalition.

A reader (Kannan Nair) wrote “We are so often told to embrace the blue ocean theory of thinking outside the box but when it comes to politics/politicians, its’ always about recycling “Has Been” politicians. I guess this is why we are where we are”

I couldn’t have put it better.