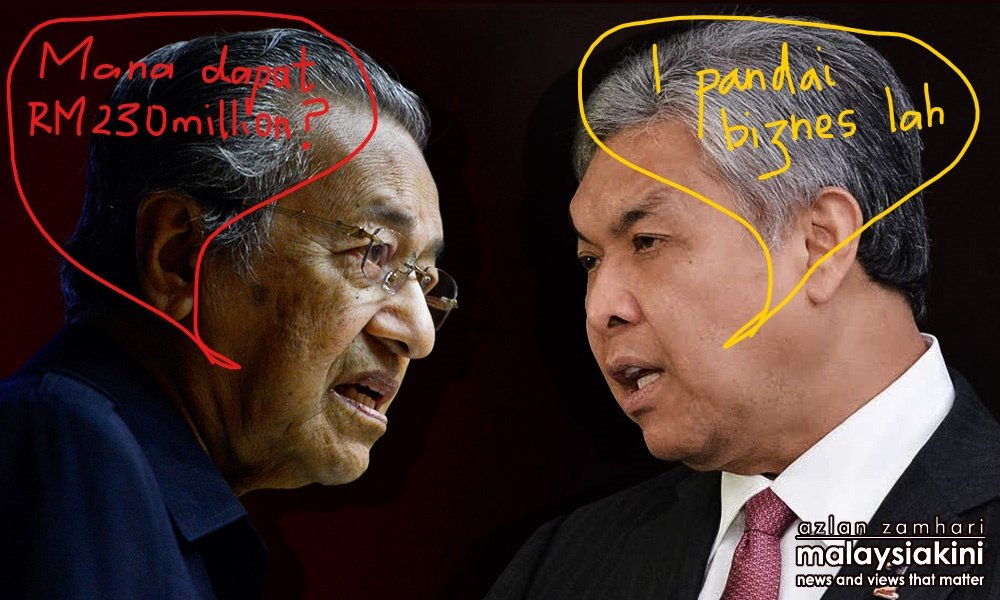 When asked if the Malaysian Anti-Corruption Commission (MACC) would investigate the allegation that Deputy Prime Minister, Zahid Hamidi, had RM230 million in his bank account, two decades ago, all the MACC deputy chief commissioner, Mohd Jamidan Abdullah, could muster was “No comment.”

When pressed for an answer, he declared, “Later. Later. We may comment later. No problem.”

A few days ago, his boss, Dzulkifli Ahmad, proudly announced that he had “survived” his first year as commissioner and  said, “…I am still surviving. Alhamdulillah (praise be to Allah).”

Praise God all you want, but do NOT make the false claim that the public has confidence in MACC and their achievements. That is misleading.

Those who escaped the MACC net

MO1, the pink diamond wearer, Penangite Jho Low, Riza Aziz (jib Abdul Razak’s stepson), and a whole host of other people are still enjoying the high life and putting two fingers up at the Malaysian rakyat. They know they are protected because no-one will dare question them or even get close to the gates of their mansions.

Naturally, we are pleased when the MACC hauls up Datuks and Tan Sris (bogus and real) who are involved in crime – murder, violence, money laundering and cheating, but did the MACC ever wonder why so many Datukships are being offered to so many people whose reputations are dodgy?

Perhaps, that is one investigation they should do. They can reduce their future workload, and check on the Datuk vetting process. Much crime is committed by Datuks (real and imagined), because the public is afraid to make police reports against Datuks.

Back to the Zahid Hamidi allegation. A reporter also asked Jamidan if he would question former PM, Mahathir Mohamad for his role in making the allegation about Zahid.

What is the point of the MACC and others making “No corruption pledges” and celebrating these signing ceremonies with lots of publicity and fanfare when all that the MACC top brass can utter is “No comment,” “Maybe later lah” or they just smile a lot?

What is the point of the MACC encouraging the public to tip off the MACC on corrupt practices, and asking the rakyat to become witnesses during court prosecutions, but then failing the rakyat, when the MACC is selective about combating large scale corruption?

Jamidan had also complained about their difficulties in some corruption cases, because informants were reluctant to stand as witnesses for the prosecution of suspects.

Can Jamidan not understand that when the MACC is perceived to be wishy-washy, or to cherry pick its cases, people will be reluctant to come forward?

If someone with information about corruption contacts the MACC, he is staking not just his reputation, but also his livelihood and perhaps, his life and possibly that of his family.

With the MACC’s apparent indecision, or selective investigation, the informant does not want to find, that in the end, the MACC is afraid of going ahead with the prosecution, and so, the informant is left high and dry to face the music and the wrath of the people whom he had been trying to expose.

If MACC wants to help rebuild Malaysia and boost public confidence and morale, it needs to be independent of the PM’s department.

Please do not claim that we are confident in the MACC because we are not. The ikan bilis are caught but the sharks are still roaming free, most of them, in Putrajaya.

The MACC must change its attitude.