Multatuli says that judging by the experience of the Semai community in Ulu Geruntum, there appears to be no difference between  the  previous UMNO-BN Government and the present PH Government.

The Perak MB is good at breaking promises. Get rid of him! 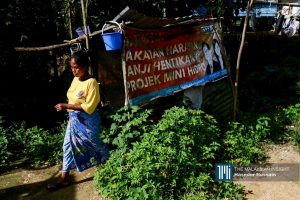 A Semai woman walking past a banner protesting against the building of a mini dam near Ulu Geruntum, Gopeng. Credit The Malaysian Insight

Multatuli: “…The plight of the Semai of Ulu Geruntum, Gopeng is the latest in a long list of ‘disasters’ and broken promises by the PH Government in Perak.

This time it is the building of a mini hydro-electric dam on Semai Ancestral land.  The destruction so far includes the bulldozing of their burial plots for an access road. Future damage will be the pollution of their water source, the loss of the forest where they get their food and destruction of the fish habitat on which their existence depends.

Although the project was approved  by the UMNO-BN administration; the present PH Government could have reversed the decision but instead have allowed it to go ahead.

The PH Government has decided to ignore the protests of the Semais, NGOs  and environmentalists as did the previous government.

In other words there is no difference between  the  previous UMNO-BN Governemt and the present PH Government.

I thought governments are supposed to heed their constituents.

In this case it is doubly worse as the Menteri Besar, Ahmad Faizal Azumu won his seat because of the Orang Aslis in his constituency. Faizal Azumu has a funny way of showing  his gratitude, I must say.

This is the latest in a dhobi list of Faizal Azumu’s blunders which includes the appointment of a RM2 company to do reforestation, the rocket science park, the appointment of a Johor company to handle waste management in Ipoh, the taking away of land from farmers to give to overpaid footballers. Till today these farmers have not been given alternative land as promised by the government.

This column has asked for Faizal Azumu to be replaced by someone with a little more grey matter but he is still there. Frankly it’s a case of you scratch my back, I scatch yours. There is honour among thieves as they say. Politicians in the same government are good at watching each other’s back.

But who watches out for the public? 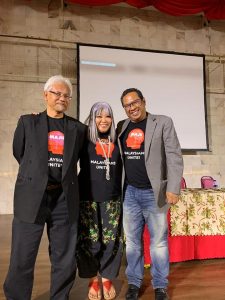 Many have asked for a Third Force to emerge. MAJU has tittilated the imagination of the public but that’s about all.

At their ‘Ipoh Roadshow’ they promised to set up a State Committee to promote the “Third Force” idea.

To my knowledge nothing has been done.

May I suggest to MAJU that their idea of playing the role of a pressure group does not work. In any case we have enough pressure groups; what we need is a real alternative.

Their idea of ‘selecting’ candidates it can support is naïve.

It is one thing to put out a list of what it wants but another to achieve it.

There is a saying: “If you want something done, do it yourself”. MAJU cannot hope that their ‘selected’ candidates will carry out their desired goals – especially candidates who are tied to a political party (which MAJU says it will support if they tick the right boxes).

To make changes based on this thinking is a pipe dream.

I would like to suggest the following strategy instead:

Only when MAJU  has a seat in the  state cabinet can it influence policies and changes in Perak. Only then can it ‘deliver’ – show Perakians what good governance can do. Without a seat in government it can only protest; and we know that protesting is just so much hot air at the end of the day; especially with a government which will not listen.

Better still if another party besides the two blocks can also win seats. I am thinking of Parti Socialis Malaysia which has similar goals to MAJU. It is the only ‘honest’ party which looks after the interests the have-nots.

Perakians are desperate for real change

Perakians (as all Malaysians) are desperate for real change. They want a real choice – not the ‘lesser of two evils’. Having been betrayed by PH in GE14 Perakians now want a Third Force.

But if MAJU wants to achieve its goals, it must act now and not when GE15 is here.  2023 is not that far off. It has to build up support in its targeted constituencies. Remember the established parties have the resources and the organisation; and although they have lost credibility with the people those two assets can still work for them.

MAJU must put its money where its mouth is. Siti Kassim, Tajuddin Rasdi and Shamsul must lead the charge and offer themselves as candidates.

I am sure there must be other credible potential candidates in the MAJU stable.

Perakians have called for Faizal Azumu’s sacking many times without avail.

I have come to the conlusion that even his going is not enough. The rest of the PH ExCo are just as culpable. They are accessory-after-the fact to Azumu’s incompetence and lack of  honesty.

And God forbid we should allow UMNO-BN back in. They have done enough damage to Perak for which we are still paying.

It is impossible for MAJU to make an impact Malaysia wide in 2023. But if it concentrates on Perak it can make a diference and from there show what it can do.