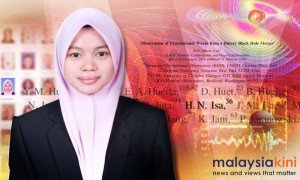 Malay women remember their fathersâ€™ advice about gaining an education, to liberate themselves from the shackles of Malay parochial attitudes and bondage.

The Malays who made MalaysiaÂ proud around the world are successful, intelligent and articulate women.

Sadly, the Malay men, whose faces have been splashed over foreign newspapers, have proven to be an embarrassment to the nation.

If Malay men are a disappointing failure, then it is time that Malay women took the initiative and metaphorically whipped their men into good behaviour. The nation is suffering because of the actions of a few Malay men, and the apathy of the rest of the Malay community.

The list of infamous Malay men is headed by someone who is unashamed about name dropping and receiving foreign â€˜donationsâ€™.

In New Zealand, a junior military man, on his first overseas posting, faces a charge for sexual assault and for defecating in public.

In Australia, a convicted attention-seeking criminal revels in teasing the nation about the murderer of the Mongolian model, Altantuya Shaarriibuu.

The achievements of the Malay women are a joy to read. A PhD physicist at the University of Glasgow, 28-year-old Hafizah Noor Isaâ€™s research, made significant contributions in physics. Her team may qualify for a Nobel Prize.

Gymnast Farah Ann Abdul Hadi, 21, won six medals, including two gold, at the South-East Asia Games at Singapore. Her withering remark that â€œempty tin cans make the most noiseâ€ to the religious bigots who attacked her for wearing a leotard, won her even more praise.

It must have infuriated the Perak mufti, Harussani Zakaria, who is remembered for his statement about wives refusing to have sex with their husbands when on the top of a camel.

Farah Ann is as nimble with her limbs as with her tongue.

Pahang born, 18-year-old Hajar Nur Asyiqin Abdul Zubir, was awarded a Bank Negara Malaysia (BNM) scholarship to read Chemistry at The University of Oxford. The nation heaped praises on her, but the religious bigots tried to undermine her confidence, and attacked her for not wearing a tudung.

If tudung-wearing is a sign of chastity, why is there a high percentage of tudung-wearers who are unwed, teenage mothers? Using emotional blackmail on Facebook, one man warned Hajar Nur that her father would have to bear her sins, because she did not wear a tudung.

Why have the bigots not told Najib Abdul Razakâ€™s spouse that she should cover her hair?

In 2014, the Chevalier De La Legion dâ€™Honneur, France’s highest award, was conferred upon Zainah Anwar, the co-founder of Sisters in Islam (SIS), in recognition of her services in defending the rights of women. The French Ambassador said, â€œBy helping Muslim women, Zainah in turn has helped all women around the world.â€

Despite the recognition, the conservative Muslims and PAS do not appreciate the good work done by SIS.

Malay men feel threatened by successful and vocal Malay women. G25’s Noor Farida Ariffin, a former lawyer and ambassador, received a rape threat for her remarks about the moral police and invasion of privacy. Aisyah Tajuddin, a journalist with independent radio station BFM, who mocked hudud law, received death and rape threats. The menâ€™s best defence is violence and sexual assaults, instead of intelligent discourse.

There is an arrogance about many Malay men that will never endear them to the public. Did the Ketuanan Melayu agenda train him to be aggressive, by misleading him that he is entitled to more rights than others?

The Malay man will never admit any wrongdoing. He thinks that to say sorry is sign of weakness and an admission of defeat.

So, how does one explain his insecurity and low self-confidence? In the Malay community, some families â€˜valueâ€™ their sons more than their daughters. Sons are spoilt. Sons do not have to help around the house.

When they grow older, their girlfriends and later, their wives, take over from their mother, and spoil them rotten. When the men venture into the big bad world, the New Economic Policy (NEP) is their metaphorical mother, giving them what they desire, without any effort.

When confronted with a â€˜strongâ€™ woman, Malay men are shocked. How dare she tell him what to do? How dare she have an opinion? How dare she not behave like a timid mouse and pay him the homage that is his due?

The Malay manâ€™s thinking is steeped along traditional race, religious and cultural lines. This is his Achilles heel.

Malay women have always had to work twice as hard to be recognised, both within and outside the home. Despite this, they still fail to get the respect they deserve.

A makcik once said about her household, â€œIf you want something done, ask a woman to do it.â€

The Malays need a mental renaissance before the community and nation can embrace change.