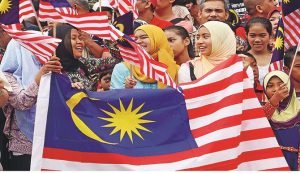 Umno-Baru cons the Malays into thinking they are â€œspecialâ€. In reality they are victims ofÂ racism, as much as the non-Malay. In addiiton, Umno-Baru has made others loathe the Malay.

When we talk about racism in Malaysia, most people tend to think of discrimination against the non-Malays. Scholarships are awarded to Malay students, even though their grades are lower than a non-Malay.

Then there are business opportunities which are available under the NEP. Allocations for cheap housing. The planning approval for building houses of worship. Requirements for providing halal food in restaurants and government canteens.

People rarely think that the Malay is a victim of racial discrimination and racial slurs. Sadly, the affirmative action policies of Umno-Baru have done a disservice to the hard-working Malays, who succeed on their own merits.

When one young Malay graduate was employed by a multinational, rumours circulated that he must have had family connections, which facilitated his appointment. People ignored his work performance and skills. He hated working in the toxic environment, and left.

The Malay woman is a victim of peer pressure and in the civil service, the Malay woman, who wants her career to progress, must conform to a specific dress code.

Few people have the strength of character and the wilfulness to oppose the system which places a high emphasis on wearing a tudung, or covering up one’s body. Making a stand may mean one is treated like a pariah, even within one’s own community.

In one government school, a Malay mother said that her children were admonished for sharing their food, with non-Malays, during break. The teacher scolded the Malay teenagers, and said, â€œStop-it! Don’t you know it’s haram to share food with a kaffir?â€

This was said in front of the non-Malay friends of the Malay teenagers. When the Malay parents complained, their children became victims of an insidious attack, by the teachers. They had detention. Disciplinary measures. Extra assignments. This was punishment for complaining to the headmaster.

The Malays are subject to the most intense invasion of their privacy. No one is condoning extramarital affairs, but people are adult enough to know their responsibilities. It is their own business, if they want sexual liaisons with others.

Malays bear the full brunt of the khalwat squads, when the moral and religious police, humiliate them in public, if they are caught in hotel rooms.

Again, only the poorer Malays suffer this injustice. Rich Malays can have any number of sexual trysts, because the moral police rarely enter 5-star hotels.

Most of our anger and hostility towards someone of another race, emanates from frustration and envy. What else can people do, apart from make crude remarks and avoid making friendships?

Who benefits from racism?

The ordinary rakyat must realise, that the system, which is rigged by the politicians, principally Umno-Baru politicians, benefit only the elite and their cronies.

The cronies who had the blessing of successive PMs, are not just the uber-rich Malays. Non-Malay cronies enjoy maximum benefits, too. Remember Vincent Tan? Ananda Krishnan? Yeoh Tiong Lay? You probably know of more.

Old timers claim that during the British colonial era, clubs like the Ipoh Swimming Club, the Lake Club and the Penang Swimming Club opened their membership only to the orang putih. Later on, members of Malay royalty were allowed, and as independence approached, more wealthy members of society, like the Chinese towkays and Malay leaders of the Malayan Civil service, gained entry to these clubs.

The new Malaysians are forgetful. Today, Umno-Baru Malays, our new colonial masters, thrive on divide and rule. They have forgotten the valuable lessons of the past, about racism. The elite prosper, whilst the majority of the Malays suffer from these affirmative action policies.

Do not think that your community is the only victim. We are all victims.

Fight racism by rejecting all forms of racism. Swiftly punish politicians and businesses who condone racism.