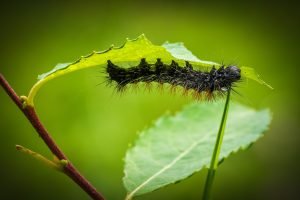 For the past three days, the villagers of Kampung Tepi Laut, Mukim Tebengau, in Kuala Kedah, complained about an invasion of thousands of black caterpillars.

Uh-oh, is this the Malaysian version of the Ten Plagues of Egypt?

Below is a simplification of the Bible story of Moses and the Ten Plagues. A story of enslavement, God’s warning and his wrath.

The Hebrews were slaves to the Egyptians but God told Moses to set them free. Moses told the Egyptian ruler, the Pharoah, what God had told him but the Pharoah ignored him. So, to convince Pharaoh, God brought 10 different plagues over Egypt.

The River Nile was turned blood red. Still, the Pharoah did not think this was from God.

Arghhh. The waterways, rivers and seas around Kuantan are stained red from bauxite.

God sent the frogs which covered the land.

God sent in the gnats which buzzed everywhere.

God sent in the flies.

Oops…we have no cattle….none were purchased, because the money was allegedly used to buy luxury condominiums.

The rakyat are boiling with the pain caused by the high cost of living and hearing about corruption scandals.

The Pharoah still ignored God, so He caused hailstorms over Egypt.

God sent in a plague of locusts and the vegetation died.

i) A “breed” of locusts thrived in Sabah. The “locust” activity prevented clean piped water from being supplied to every household in Sabah, even in rural areas.

ii) One of our main exports, palm oil, is decreasing in production, because of a devastating disease caused by Ganoderma boninense, which eventually kills the oil palm. No cure has yet been found.

Oh dear…many areas in Sarawak were hit by blackouts just a few days ago.

The stubborn Pharoah still refused to listen to Moses, so God brought in the last plague, the plague of the first born. Only then, did the Pharaoh set the people free.

And the Malaysian version is …… to be continued…