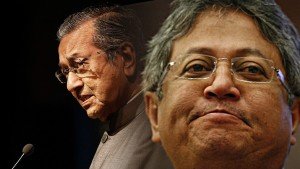 Malaysians are eager for reform and will unite to regain our lost freedoms, but we will not be betrayed, again.

If Malaysians are wary of former PM Dr Mahathir Mohamad, it is not without reason.

Malaysians with a bright future were denied scholarships or jobs, because they were not Bumiputra.

Malays who did not toe the government line, were punished.

Singapore and other nations, absorbed the bright Malaysians. We rejected them for being the wrong colour or creed.

During the past four decades, we lost our democracy and the many checks and balances needed for a stable government.

Who took away the checks and balances for a democratic government? The irony is that today, he wants our help.

Malaysians setting aside their differences.

He urged us not to be critical of Mahathir.

Zaid is right to suggest that we trust one another.

He explained that Mahathir had lived in a different era and like his Singaporean counterpart, Lee Kuan Yew, chose to prioritise “issues of economic survival and racial unity over democracy”.

Zaid’s intentions are sincere but Malaysians, comprising Malays, non-Malays, East and West Malaysians, have been betrayed by Umno-Baru and Malaysia’s longest serving premier.

Malaysians who were born from the late 1980s onwards, do not know the damage, which Mahathir and Umno-Baru, did to Malaysia.

The Kadazan-Dusuns and Muruts were not betrayed by communists or colonialists. They were betrayed by Project IC (or Project M – where M stands for Mahathir), and turned into a minority in their own land.

In Project IC, illegal immigrants were allowed into Sabah, for a political reason, to bump up numbers, and voters, for the ruling government.

Ask the residents of Ipoh, once dubbed the City of Millionaires, what happened after Maminco, the company with a paid-up capital of RM2, tried to corner the tin market, on the London metal exchange.

The Americans released their stockpile of tin and the price of tin halved in 1985. An industry which employed 40,000 people was doomed. Ipoh became a ghost town. People fled overseas to survive. Many worked in Chinese restaurants in the west, washing dishes. Others retrained and never returned, home.

Despite its claims that Umno-Baru protects the interests of the Malays, one dark incident in Malaysian history occurred in Memali, a village in Kedah, when Malays attacked Malays. They were on different sides of the political divide. Eighteen people died at the hands of Malaysian police field-force troops. Umno division leaders were afraid of the charismatic ustaz, Ibrahim ‘Libya’, of PAS and of defeat in the looming general election.

Despite the revenue from oil, gas and timber, people from Sabah and Sarawak are the poorest Malaysians.

Nowadays the private lives of Muslims, even in the privacy of their own homes, is a matter for the state.

The moral police roam wild and the Malay women are even more downtrodden than the men. Their lives are subject to the scrutiny of the men in robes.

Non-Malays are not spared.

Many scandals, were swept under the carpet. The same happens today.

Umno-Baru is the problem.

Once Najib is replaced, your nightmare will continue.

The problem is Umno-Baru. Cash is their new religion.

You know what to do.