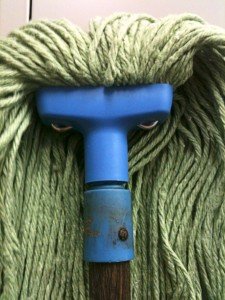 How many uses are there for the mop? Quite a few, apparently.

For a start, there are many types of mops. Flat head mops. Microfibre mops. Strip mops. Sponge mops. But the most familiar mop to most people are the traditional string mops. These have long, looped cotton strings, attached to a mophead. They are good for large spills, can work over uneven surfaces very well and have a high absorbency rate. Last February, Zunar was outside the Palaces of Justice, to protest the ruling which upheld the Sodomy II charge against Opposition Leader, Anwar Ibrahim.

He “held” court outside the Palaces of Justice, and pretended he was the Judge in Kartunland.

He wore a black-robe,Â  held a child’s outsized gavel made of plastic, which makes a squeeky noise when it strikes a hard surface, and stuck the string mop over his head, to show off his “judge’s wig”.

He was arrested for his tweets criticising the verdict, and perhaps for wearing the mop over his head.

Another use of the mop, is for keeping the floor clean and to mop up spills. In McDonald restaurants, mops used for the kitchen area cannot be used for the toilet.

However, in Malaysia, one mamak restaurant had a novel use for the mop. To save time, and be economical with energy and water, a cleaner used the mop which he had mopped up the kitchen floor, to “clean” the frying pan and top of the kitchen stove. How creative!

One restaurant patron did not agree. He left in a hurry, and although he had come into the restaurant starving, he left, his hunger pang all gone.

Full article and video of “creative use of the mop” here: http://www.theantdaily.com/Main/Creative-use-of-the-mop-in-a-mamak-restaurant