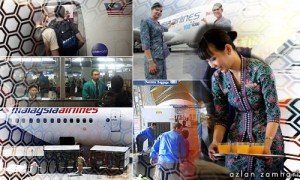 If I were the unnamed stewardess who cried in front of Perlis mufti Dr Mohd Asri Zainul Abidin, the tudung and alcohol would be the least of my concerns. She had complained that she was not allowed to wear the tudung, and had been forced to serve alcohol.

Unless she goes around with her eyes wide shut, and is extremely naÃ¯ve, she should be more worried about the four â€˜Wsâ€™ in MAS, which is now Malaysia Airlines Berhad. They are wastage, wanton sex, and the workersâ€™ attitude and welfare.

I was once introduced to a senior MAS pilot, smartly attired, greying at the temples, a little weary after a transcontinental flight. I offered him my right hand to shake, as one would in greeting.

My hand hovered in space for several seconds, which seemed like hours, waiting for him to reciprocate the gesture. I might as well have been handing him a live cobra. As I stuck my hand nearer to him, thinking he had not noticed it before, he recoiled.

I felt rejected, then confused, and finally angry. He treated me as if I had a contagious disease, even though the handshake would have been a gesture of goodwill.

What would have happened, if he had been the only one on board to give Cardiopulmonary resuscitation (CPR). Would he deny non-Muslims and women any help? Conversely, he might have needed CPR, and the only person who could administer it was a non-Muslim, or a woman. The questions still plague me to this day.

A few years ago, I noticed a cabin crew member at a European airport, before MAS routes were reduced worldwide. As soon as a man wearing a skullcap walked away, the MAS crew member took his handkerchief and vigorously wiped his hands, as if to clean them. He muttered under his breath, â€œI didnâ€™t realise he was a Jew.â€

Talking to various MAS ground crew, one cannot help but be shocked by the scandals they divulged of sexual liaisons in the hotels which housed the airline crew. If the moral police were to be stationed at these hotels, they would have a field day.

Perhaps Christoph Mueller, the MAS CEO, would need to continually recruit airline crew to make up for the shortfall of employees caught committing adultery. He could employ a chaperone at every international destination, to ensure that there was no hanky-panky between Muslim employees.

For decades, MASâ€™s wastage, in the form of allowances, overtime payments, salaries and over-priced contracts, bled it dry. The problem is that MAS was never free from political interference. It continues to employ so-called advisers, who are detrimental to its success.

Leaving with smiles on their faces

In a recent cull, employees who were also cronies of the managers and middle-managers were laid off, but they left with smiles on their faces. Some allegedly pocketed a few million ringgits, because the formula for their golden handshake was calculated from the time they entered the service.

The joke circulating the corridors of KLIA was that everyone should have behaved badly in their tenure of employment, because those who had been â€˜disciplinedâ€™ were laid off, with the same generous terms.

The staff who were left behind knew they would be sacked at some point. Recently, many people have left to join other airlines.

Following the stewardessâ€™s plea, Dr Asri urged Malaysia Airlines to allow its Muslim cabin crew to wear the tudung and not serve alcohol.

If the same allowances were to be given to Muslim staff, the Hindus need not handle beef, and the vegetarians should not be allowed to handle meat of any kind. The Sikh daggers, which are a religious symbol, should be allowed to be carried on board and not be treated as a security risk.

So, when will this religious nightmare end? MAS has been bled dry by government interference; it does not need religious interference to make the coup de grÃ¢ce.

A person who seeks employment with a company should know that she must separate her religion from her job requirements. The stewardess must be stupid not to know that MAS is not a â€˜syariah-compliant airlineâ€™, whatever that term means. Even some middle-eastern airlines do not insist that their stewardess wear the tudung, and alcohol is freely served on board.

If the likes of the Department of Islamic Advancement of Malaysia (Jakim) are allowed to plot MASâ€™s flight plans, there will be turbulent times ahead.