The nation is like a wounded animal, limping around in agony, with an arrowhead lodged in its body.

The arrow was shot by Najib Abdul Razak, and the arrowhead is a metaphor for the 1MBD scandal, the RM2.6 billion donation, and the many other ills which plague Malaysia.

Cast your mind to last year. Within days of Maria Chin Abdullah’s appeal, to rally for clean governance, the nation donated RM2.8 million to her cause.

It was tiny, in comparison with Najib’s “donation”, but it showed the depth of contempt, that Malaysians felt for him and his government.

Maria successfully galvanised Malaysians, both in Malaysia and 55 cities around the world, to express our anger at the worsening national crisis.

The Bersih 4 rally, in August 2015, was peaceful, and the  most successful gathering of 500,000 Malaysians. The supporters of Bersih 4, included members of Umno-Baru, a former PM and several policemen.

Maria ensured that every penny that she spent, was recorded. She repeated her five demands, and called for true democracy to be restored to Malaysia

This year, Maria again successfully mobilised Malaysians to express our contempt for Najib and his administration.

The Bersih 5 organisers led a nationwide road tour and was hounded by the Red Shirts and Umno-Baru sponsored thugs.

Najib knew that Bersih 5 would be another success, so he arrested several Bersih 5 organisers, Opposition MPs and student activists. The police ordered a lockdown of central KL and many roads leading to Dataran Merdeka, the symbolic square, were closed.

There was no sign of outrage, from Umno-Baru and BN supporters, for their leader’s mismanagement of Malaysia.

Worse still, was the silence from the comfortable “middle” class Malaysians?

Senior Umno-Baru politicians, only show concern for their political survival.

Jamal Yunos, given a bloody nose cried, “I am injured…..why is everyone laughing?”

Days before the march, the police declared that the rally was illegal. The harassment was unnecessary.

The IGP did not arrest Red Shirts leader, the Umno-Baru division head, called Jamal Yunos, who declared an all-out-war on Bersih and promised bloodshed.

During a scuffle, with plainclothes policemen, Jamal was punched on the nose, and a tearful Jamal warned that he would ‘chop-up’ (cincang) those responsible.

First he blamed an Opposition supporter for punching him, then he was heard on a Malaysiakini video blaming the police. Finally, he lodged a police report that a Bersih supporter had given him a bloody nose. Can he not get his story straight?

The funny thing is that days earlier, Jamal and his Red Shirt thugs, had given a silat demonstration with Red Shirts taking turns being hit with wooden planks. This is presumably to show others that the Red Shirts are a force to be reckoned with… in other words, “Dont’ mess with us.”

The rakyat is not the enemy

The rakyat is not the enemy of the police. The police must remember that their job is to serve the rakyat.

Malaysia is at the point of no-return.

Maria stuck her neck out and risked her safety, to galvanise Malaysians, in showing concern for their country. She and members of her team, including family, had received death threats.

Today, she has been locked away like a common and dangerous criminal, to be tried under the Security Offences and Safety Measures Act (SOSMA 2012) as if she were a terrorist.

Our leaders, senior politicians and civil servants allowed the 1MDB and other scandals to continue, for too long.

That is the national disgrace; not Maria and her Bersih 5 rally.

We live in a warped world, where tensions flare, at the slightest provocation, or an imaginary lack of respect for Malays, but billions of ringgits which go astray, barely raise an eyebrow.

The best form of support, will be to gather outside the major police stations, throughout Malaysia, to show solidarity; but be prepared for this to be labelled as a political protest.

Maria dared to lead Malaysians, who care for their country.

Now is our chance to show her our gratitude by demanding her immediate release. 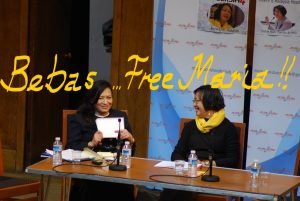