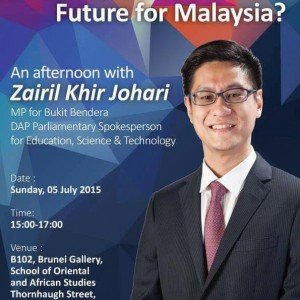 Monsoons Book Club (MBC), an independent, not-for-profit organisation, aims to stimulate discussion, provoke ideas and challenge accepted norms, by engaging with Malaysians and Singaporeans, who are eager for change.

Zairil Khir Johari is the latest guest speaker to be featured by the MBC, this summer. He will speak this Sunday, 5 July at B102, Brunei Gallery, School of Oriental and African Studies (SOAS), Thornhaugh Street, Russell Square, London WC1H OXG.

The event is free and open to the public. It will start at 15:00hrs and last for two hours.

The Penangite became the MP for Bukit Bendera, after winning a record majority, in Malaysiaâ€™s 13th General Election. He is also the youngest member to be voted into the Democratic Action Partyâ€™s (DAP) central executive committee.

Zairil and other Malays, have helped to reduce the Chinese-centric image of DAP, and increase the appeal of DAP to Malay voters.

The MP for Bukit Bendera, is also DAPâ€™s Parliamentary Spokesman for Education, Science and Technology, and a columnist for The Malaysia Insider. His articles cover many issues from religious extremism to road pricing, and education to the environment.

Having graduated with a Bachelor of IT (Hons) in software engineering from the Multimedia University in Cyberjaya, Zairil pursued a Master of Arts in International Studies and Diplomacy, from the School of Oriental and African Studies (SOAS), University of London.

On his return to Malaysia, in 2006, he formed a company making customised chocolates, and at the time said, â€œPolitics is for older people,â€ despite encouragement from his late father, Mohd Khir Johari, the former Education Minister, and veteran Umno strongman, to enter politics.

He holds other posts as DAPâ€™s Assistant National Publicity Secretary, Vice-Chairman of DAP Penang and Executive Director of the Penang Institute, a Penang based, state-funded public policy think tank.

During his time at university, his mates gave him the nickname â€œTom Kurusâ€, because he was thin and his favourite actor was Tom Cruise.

Last year, Zairil was selected as a global â€œLeader of Tomorrow,â€ at the annual conference of the 44th St Gallen Symposium in Switzerland, which is an annual conference, with the aim of encouraging constructive debate on current economic, political and social issues.

The Monsoons Book Club hopes to give all Malaysian students, professionals and residents living in England, the opportunity to meet and engage with some of the visiting Malaysians who can bring about change. 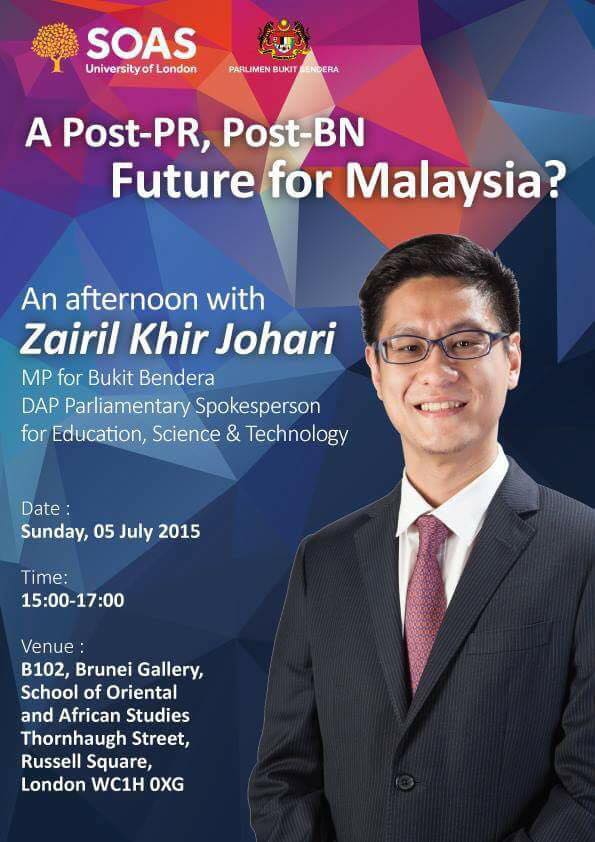 (2) Euston or Euston Square and a short 10 minute walk.