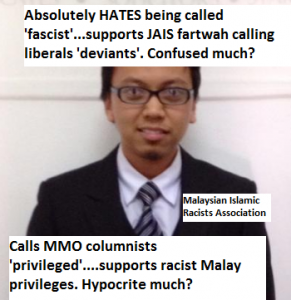 In the piece below, the ISMA activist, Danial Ariff Shaari (above), appears to be confused.

There is no confusion.

Others just call them, sanctimonious bastards.

Here is the article:

Zurairi AR is enjoying his privilege as a Malay Mail Online (MMO) columnist by disseminating liberal propaganda in favour of the news portalâ€™s agenda.

MMO, as we know, is and has always been critical of Islam and its institutions.

Zurairi meanwhile writes about how â€œfascistic Islamists are gaining ground in countries where Muslims are the majorityâ€.

A few more paragraphs down in his Jan 29 column article, he highlighted a Tanjak piece that was ostensibly helped to â€œspread by religio-nationalists Ikatan Muslimin Malaysia (Isma), with its deputy president Aminuddin Yahaya later on stoking fears of the status of Islam and the Malays if such a move succeedsâ€.

[â€œSuch a moveâ€ refers to a suggestion for the Rukun Negara to be incorporated as a preamble to our federal constitution.]

Zurairi is obviously a Malaysian liberal writing in an equally obvious left-wing media. He couches his view of Isma under the label â€œreligio-nationalistsâ€ but weâ€™ve already had a foretaste of how his newspaper/portal framed Wanita Isma as purdah-wearing extremists.

Aside from casting aspersions on the good reputation of the Islamic authorities and Islamic NGOs, the liberals also accuse Muslim individuals (associated with the religious bodies aforementioned) of trying to turn Malaysia into a theocratic state.

Is â€œtide of Islamizationâ€ something bad that must be stemmed?

These liberals in the media will opportunistically leverage on genuine social issues to glance their sidelong attacks on conservative mores. Take Zurairi for example.

A week prior to venting on â€œthe tide of Islamizationâ€ (see above), his Jan 22 column started off with commentary on a proposed ban against the kap chai motorbike in Kuala Lumpur.

Then Zurairi crosses the Titiwangsa mountain range into Terengganu to take a shot at the stateâ€™s Jabatan Hal Ehwal Agama.

He seems to believe that JHEAT staff are Islamic enforcers who are â€œout-of-touch with reality once religious fervour clouds their headsâ€.

This Terengganu religious fervour is apparently characterized by â€œwarning pillion riders against putting their hands into the jacket pocket of their partner, hugging and leaning against each other, and sitting too closely on motorcyclesâ€.

The said motorbike riders and their passenger on pillion are unmarried Muslim couples, by the way.

Some Malay liberals appear to be all for men and women yang bukan mahram sitting pressed together in public side by side.

Human rights lawyer Siti Kasim â€“ she of the feminist middle finger fame (above) â€“ is incensed at an express bus company for its gender-segregated seating policy.

Siti is the liberal media darling, mind you.

Zurairiâ€™s method writing is an attempt at using Islam as a scapegoat to spread the conspiracy theory of creeping theocracy.

His fellow MMO columnist Syafiqah Othman Hamzah â€“ see below â€“ is so hyperbolic about â€œthe evils of theocracyâ€ to the point of being shrill.

Theyâ€™re not everywhere but actually congregated in the MMO. And theyâ€™re loud so that we make the mistake of thinking there are more of them due to all the noise theyâ€™re making.

Now letâ€™s talk about the Malay Mail Online that hires and promotes these Malay liberals.

Most certainly Azrul Mohd Khalib is the first name to come to mind when we speak of the megaphone provided through the MMO platform.

Azrul is concerned about correcting injustices towards the transgender community.

Is he more concerned about the right of transgenders to pick which bathroom they prefer to use rather than their health risks resulting from LGBT sexual practices?

Recently Assoc. Prof. Dr Rafidah Hanim Mokhtar, vice president of Ismaâ€™s I-Medik, had pointed out that the LGBTs are among the groups most affected by AIDS.

â€œThe news of Transexuals Pageant, obtained via an FB of an activist, should not outbalance the health risk the group pose, as revealed nonetheless by an endorsed national report through systematic studies involving thousands of people and health specialists,â€ wrote Dr Rafidah.

She cautioned that â€œthe media needs to have greater sense of responsibility towards the nation by reporting facts and news that really matterâ€.

Instead, the kind of news that irresponsible MMO chooses to highlight is the purportedly â€œmost prestigiousâ€ beauty pageant in Australia for â€œfemale impersonators, transvestites, drag queen performers and transgender womenâ€.

In the eyes of Malaysiaâ€™s most liberal media, this is news.

Zurairi for instance is seemingly upset with a Selangor fatwa characterizing the â€˜liberalism and religious pluralismâ€™ line of thinking as deviant and contrary to Islamic treachings.

Liberals and their enabling media that promote open lifestyle values such as LGBT are insistent that Malaysia is a secular country. It figures perfectly why they would insist on this fiction of secularism.

There is the famous saying by Descartes â€œI think, therefore I amâ€. For the Malaysian liberals, it is â€œI assert, therefore it isâ€.

â€œHomosexuality, transgenderism, drug and alcohol consumption are all impermissible in Islam. Malaysia has adopted Islam as the religion of federation, which has rightly addressed all these high risk behaviour through the constitution, the state laws and enactments to ensure that we are free from AIDS and HIV epidemic as well as other sexual transmitted diseases as much as possible.

The position of Islam on these issues is clear.

LGBTPQ is â€˜No Goâ€™ zone. (â€˜Pâ€™ is pansexual, such as popstar Miley Cyrus has declared herself to be.)

But if we dare to finger the anti-constitutional liberals for their bullying, we will be accused by them of being xenophobic, homophobic, alphabet-phobic and what not.

It is then that we realize how deep the liberals can sink into the Islamophobic seas.