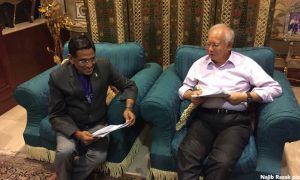 In early April, Najib Abdul Razak claimed that Dr Mahathir Mohamad did not solve the problem of the Indian community during the 22 years, he was PM.

What did Najib do, to help the Indian community, during that time?

How convenient of Najib to blame Dr Mahathir. So, what was Najib’s contribution during the 15 years, to help the Indians?

How hard did Najib try to help Indians when he was in Dr Mahathir’s cabinet?

When Dr Mahathir was the PM from 1981 to 2003, Najib was also in his cabinet. He was Deputy Minister of Energy, Telecommunications and Posts, before becoming Prime Minister of Pahang. Then he returned to the Cabinet, as the Minister of Youth and Sports.

Did Najib speak out on behalf of the Indian community, especially when he was in the ministries of Education, Youth and Defence? Did he appeal to Dr Mahathir, to help Indians? He was in Dr Mahathir’s cabinet.

Did Najib even raise the issue of the Indians during that time? The answer is easy. Najib probably did not care about the Indian plight then, and he does not care now.

Poverty does not recognise race, skin colour or religion. The Indians like many other marginalised members of the community, have many problems in education, being stateless, many cannot obtain affordable housing, have employment issues, health issues, & sadly, suffer from “sudden deaths”  when detained by the police.

If Najib was really sincere about helping Indians, he need not have blamed Dr Mahathir. Najib was a senior member of Mahathir’s Cabinet and Umno-Baru. He is just as responsible for what happened during Dr Mahathir’s tenure.

Dr Mahathir does not act on his own. So, how hard did Najib push Dr Mahathir to help resolve issues in the other communities in the 1980s, 1990s and when he was under Abdullah Badawi?

How hard did Najib try, when he was the Education minister, to offer smart and able Indian students scholarships?

As Defence Minister, how hard did Najib push for Indians to be recruited in the armed forces?

As the Minister for Youth and Sports, how hard did Najib pursue Indians to participate in sports, be it at the school level, the national level and in international events?

MIC and Umno-Baru play footsie of “You help me, I help you.”

The MIC does not help Indians, nor does Umno-Baru care about the MIC. What both know is, “You help me, I help you.”

There are MIC members who have become eye-wateringly rich, but many Indians still suffer.

Najib’s extent of help, to the Indians, is to emerge from hiding every five years, make feeble and empty promises like the Indian blueprint, and bring truckloads of rice and other free food, before the election.