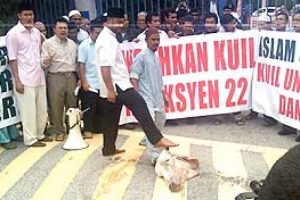 This is Najib Abdul Razak’s method to ease us through the early Monday morning blues.

In a Bernama report, he said, “We don’t practice extremism in this country but moderation. Islam itself practices the concept of wasatiyyah, namely, balance and moderation in every action and practice.

“Buddhism also has the same concept although the faith is different…the problem taking place now (violence), is not due to religions but the presence of extremists in religions”.

Najib’s claim, that we are “moderates”, came during a Chinese New Year Open House function at Bentong Square in Bentong.

Najib’s “mopderation” can be switched on and off like a tap, the rest of the year, depending on the occasion.

He also said, “We respect each other’s religion, for example when I arrived here just now, Adnan asked me to wait first because they were performing isyak prayers at the mosque, but the Chinese did not complain, they waited and respected this… this is the beauty of Malaysia” .

So did we all dream or perhaps, imagine, that a cow’s head had been dragged through the streets, how the IGP’s brother and a mob, forced the cross on a church to be taken down, how the word Allah is banned from being used by East Malaysians residing in peninsular Malaysia, how Malay bibles have been confiscated, how a church dinner was raided because someone thought that a conversion of Malays to Christianity was being conducted?

Is Najib planning a trip to America?