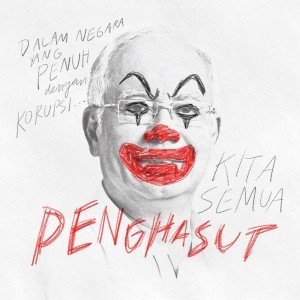 The news from Malaysia, is no joking matter. On one hand, the ulama have said that too much laughing is not allowed. On the other hand, how to keep a straight face, when the news is predominantly about insulting The Chosen One’s feeling – ie PM Najib Abdul Razak.

One would have thought that climbing the greasy pole of politics has made him thick skinned and deaf to criticism (this much is true).

Two years later, on 20 February 2018, Fahmi was sentenced to a month’s jail and fined RM30,000 by the Sessions Court in Ipoh for a caricature depicting Najib as a clown.

So, why is Najib, aka The Chosen One, easily insulted? Why is he ultra sensitive?

In 2016, a building consultant, Syarul Ema Rena Abu Samah, was charged under the Malaysian Communications and Multimedia Commission (MCMC) Act for insulting Najib’s feelings. She had criticised Najib over the Trans-Pacific Partnership Agreement (TPPA)

In February 2016, Bilqis Hijjas, a dance producer, was charged for upsetting Najib and the self-styled First Lady of Malaysia (FLOM) Bilqis’ deadly weapons were balloons….worse still “Yellow” balloons….Worse worse worse worse still…the balloons had the words ‘justice’ and ‘democracy’ on them.

Najib and FLOM: The perfect couple?

In 2016, Fahmi had to present himself at the IGP’s favourite residence, the Dang Wangi police station to record his statement. I hope he draws more clowns on the police report. It is sure to bring a smile to the policemen’s faces.

At the time, Fahmi posted on his FB, “When I go to have my statement recorded on Sunday, I face two possibilities. One, I may be allowed to go home after that. Two, the police may arrest me right after on the two alleged offences.

“I will not be afraid of facing any possibility, because I know you all will not let me fight alone.”

You are right, Fahmi!

We are behind you!  And to all the people who dare to speak out on behalf,  of the rakyat. You are not alone.

What our Opposition politicians and Umno-Baru rebels cannot do, we, the people of Malaysia, will.